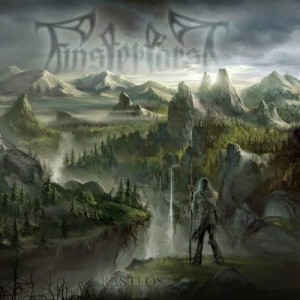 I came across Finsterforst via their latest 2014 record Mach Dich Frei and found them forest boys of good, crunchy quality. In style, clear delivery and technical prowess. Yet the lyrics were wanting somewhat, too much hate mail there. But by and large their tune turns out to be pretty mature.

Now, their magic potion Rastlos is different. Not sure how to describe it: Insomnium with a Black Forest Pie flavor mixed with a portion of Moonsorrow style of bleak, black winter lakes? Sometimes the similarities are quite startling and perhaps Finsterforst pushed this one a bit far in this here record. Evil tongues say that this is nothing else than a copy of other styles, but I would not go as far as that.

And Rastlos is quite often pretty good and in some instances even brilliant. I do like the many instrumental parts very much. They give you that feeling of vast expanses of uninhabited countryside, filled with streams, forest (evidently) and wild beasts. Really very well done. Epic and well conveying this sense of wild nature. Kind of hard to describe – some called it hidden depth. You really need to listen to this a few times to uncover all of the elements that are hiding in this tune.

But their forays into Black Metal just sound fucking pathetic. Oh, I’m sorry – I mean some of the harsher growls sound a tad politically incorrect. And this is what pulls the quality of Rastlos down – a real pity. Folks, I wanted to hear the ethereal wolves howl through the night of the eternity of the dark forests scaring the hell out of me. Because this is the essence of the wild landscape where these guys come from. Black Forest, Finsterforst – whatever.

People were scared going there way back in time. Because it was lonely, full of bears, wolves and bandits trying to steal your wares. But nope! They lost themselves in wanting to be some sort of fucking Gorgoroth Titisee style in some of the tracks that are hiding in this mighty maze of sound bytes. Luckily this is only for some part, if not this album would really go down the drain.

On the other hand, the band got guts presenting tracks that are going way beyond 10 minutes in length (some double that). With a hell of a lot of different elements that all converge on a jolly good jambalaya of tasty forest folk metal that ends up to be alluring to you. You may want it or not.

And this is where the main quality of Rastlos comes from. So much stuff in there that you absolutely need to listen to it a few times to really get into the groove and enjoy. This is not simply one part of distorted guitars, some vocals and mixed with two parts of drum blast that will equal music generation. As it appears to be for a lot of bands out there. These are exquisitely carved tunes that are presented to you. Almost overwhelming to the untrained ear with surprises around every corner of these sometimes very long and complex productions.

The intro is of course and as usual, questionable. But then the track takes on momentum and merges itself seamlessly into Nichts als Asche. And this one is a good one, pretty epic in itself. Real metal in places and thundering away, softer and more folksy in others.

Stirbt Zuletzt and Ein Lichtschein are typical Finsterforst fare, served not too hot, but also not too cold. The latter is suffering from the ill-delivered growls some, but includes some stellar metal parts. One could at times confuse both of them with Insomnium, clearly an influence there.

Unfortunately, the band also put some interludes into this mix of tracks. Supposedly to give the album some sort of a back country flavor. But for me this is (almost always) a questionable use of good recording time.

The last track Flammenrausch with its instrumental and clear voice parts is very good. But – as always – the growls are a waste, and this is a pity. If they would have structured things differently, this one would be outstanding. And I (almost and still) like this one best, nonetheless. If only it were not for the growls. It is by the way remarkable how this band evolved positively with the harsh vocals in their follow-on album. The band must have heeded the advice of their fans.

So, whilst Rastlos is nowhere near Mach Dich Frei, it still deserves a lot of credit. In some places mystical, in others hard as rock. If Finsterforst just could have cleaned up their growls a bit better, then this record would be more on the stellar level than anywhere else. And this is – as I said above – not a mistake they made again in their next album.