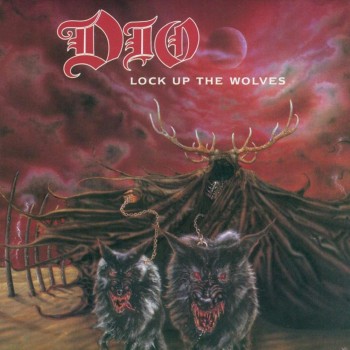 Okay, when looking through the older records that are living in the confines of this vast collection of mine, I stumbled across Dio (the one with the spider that came along). Good, old and heartwarming Heavy Metal. One of my favorite suppliers of good, crunchy and relaxing Night Music. Long time no hear, by the way, as I was much concentrating on the new age metal stuff that keeps on getting thrown at us.

Founded by Ronnie James Dio after his departure from Black Sabbath (yes, the Ozzy, Tony and Geezer one) in 1982 together with Vinnie Appice, they went on to build a remarkable career with their own outfit called Dio. Understandable choice of name, but nevertheless not super-creative in terms of increased excitement. The band dissolved in 2010 after Ronnie passed away caused by stomach cancer at age 67. One of the sadder moments of my life.

The band’s 5th studio album Lock Up The Wolves – created way back in 1990 – is one of the best (not the best and not stellar, mind you..) records Dio ever made. And I say one of the best because they had the courage to take a slightly different road. And not just continue to rocket down their well-known highway of their own making. To achieve this level of quality was no easy feat, the bar being set very high (by themselves). This compared to the very successful records they already produced earlier like Dream Evil, Sacred Heart, or Holy Diver.

To be clear, Lock Up the Wolves did not directly involve Vinnie Appice. He joined the band again for some later productions after some more interludes with other bands. However, he contributed as a co-composer on the track Born on the Sun. And not on the full production as was initially planned it seems. As a result, the album was realized with a completely new crew. This left Ronnie as the only founding band member for this here record.

Interestingly they hired a very young, but very talented guitarist called Rowen Robertson. Or more – as the lore has it – Rowen presented himself kind of fervently for selection as the replacement for the departing old (and soon to be new) guitarist. Interestingly, his tenure at Dio was relatively short-lived. Lock up the Wolves was finally the only album that was released with him directly involved. There was a second album in preparation, which never saw the light of day due to Ronnie’s reunion with Black Sabbath back in 1991.

The album delivers a crisp and direct tune, together with Ronnie’s indestructible (and always amazing) voice range. But a lot of it somewhat slower and more dreamy in style. Or more bluesy if you like – especially for those who detect blues at every fucking corner of the metal road they are on. Slower does however not mean less powerful. I like the heavy slow beat that permeates many parts of this album. Interspersed with a few faster tunes that harken back to their former ’80s glories.

So, by and large not what we believed then to be the true Dio style, which was until Lock up the Wolves fast and furious Heavy Metal. And in truth, somehow they had to get out of the standard and style set by former records. Which frankly started to grow stale on ye. So, not quite veering away from their own true style, but still avoiding continuing in the same vein as before, they came out with this here magic potion. And I admit: To get to this conclusion took me some time. And – actually – a lot of time spent with this piece of metal in private discourse. Kind of getting to know each other even better and coaxing little gems out of this heap of trademark Dio.

The first three tracks – Wild One, Born on the Sun and Hey Angel are good, solid Dio fare. Well-known in tune and easily digested. After that, Between Two Hearts goes all teary-eyed on you, at a slower pace, but still with a powerful beat. The kind of long-winded Lock up the Wolves (the title) is pretty remarkable in itself. And kind of hypnotic in style – sharply delivered. Together with Evil on Queen Street this track almost reminds me of something Deep Purple could have concocted, had they put their mind to it.

Of course, the purists are foaming at the mouth at that one. Too slow, not Dio – whatever. But you know what, this is not bad at all. Even if the style is not the same than a lot of what came before. Walk on Water is again stellar Dio fare. Fast and furious, just as we like it. And Why are they Watching Me reminds you very much of Krokus and AC/DC. No kidding, if you remember that the drummer came in straight from the latter.

In conclusion, Lock up the Wolves is one of the more progressive records this band did and I love them for it. Their usual no-nonsense beat-up-bad style, kind of influenced by some sort of satanic mock-up symbols entertain you for a while. But will not get you anything surprising enough to be really interesting for very long (whilst I love them all).

So, this record gets a good rating from me. Because this is good stuff after all and they had the guts to be progressive. And because they finally watched themselves in the mirror and it told them they weren’t the most beautiful ones in metal’s kingdom of dark horrors anymore. Followed by the creation of a jolly good new album.