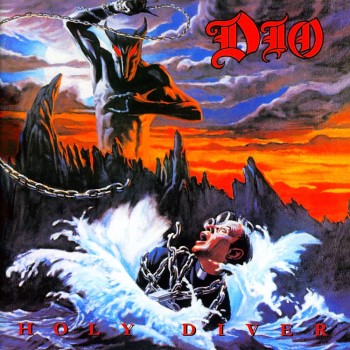 When – in 1982 – Ronnie James Dio defected from Black Sabbath and got his own band in a tearing hurry, we were all kind of scratching our heads. Not knowing where this was all going to end. Of course also counting the fact that Vinnie Appice took off with him on this flight from the witches.

The vapors surrounding their somewhat abrupt departure were pregnant with disconsolate news. About infighting at Black Sabbath, all about power and who should be calling the shots. And am I not surprised: The alpha-males assembled were probably incapable to let go and work together. All severely opinionated to a point, I can only imagine how these fights got underway and were somewhat impossible to resolve. So, once the chicken came to roost, it is only logical that Dio had to leave – or else.

But there was more. True shenanigans!

The main reason hinted back in time were rumors about mixing and remixing schemes of pre-produced tracks, the unauthorized kind in cloak-and-dagger actions during foggy nights. Of course, one party accused and the other denied, what have you. So, by and large it was an unhappy departure. This is all a long time past and water well under the bridge as we say. And whatever it was, we ended up with a new stellar player in the metal universe. Very interestingly, the new band Dio emerged this same year and – lo and behold – their first album Holy Diver appeared shortly thereafter in 1983. Quite a feat following such a hasty departure.

Now, without a stellar band, even Ronnie would have been unable to pull such a feat. Apart from the aforementioned Vinny Appice, guitars were handled by Vivian Campbell – at that time still quite unknown. And bass, plus keyboards got covered by Jimmy Bain. Also a victim of Ritchie Blackmore’s Rainbow (he got sacked back in 1977). To me an interesting choice of musicians and with 20/20 hindsight: A very lucky one too.

Holy Diver was well received back in time by critics and fans alike!

The disc still receives kudos to this day. It actually got elevated to some sort of classic nirvana status over the years. As one of the best Heavy Metal albums ever made. And the cover art became kvlt too, with Dio‘s trademark mascot Murray flinging a chained priest into the sea. And this caused quite some controversy. Remember, these were the ’80s, still relatively nice and orderly. Evil back then was of the Holy Catholic kind or it came straight from beyond the iron curtain.

The metal universe was not that diverse yet, however metal diversification was already raising its ugly head. And some thrash bands like Metallica got some serious foot in Heavy Metal’s door. Just think about their stellar album Kill Em All. So, it was very unlike today, where you do not know where to put your head, when thinking about metal. Interestingly and not quite surprisingly, Maiden’s 1982 record The Number of The Beast caused a similar controversy that ironically continues to this day.

Now after Ronnie got unchained from his former nemeses Tony Iommi and Ritchie Blackmore, slipped anchor and got underway with no restraints, this whole endeavor started to take off like a rocket. Holy Diver was only the beginning, quickly followed by The Last In Line, Sacred Heart and Dream Evil just to name a few. And all of them are classics today by themselves. The fact that he unleashed this nuclear explosion of energy at the age of 41, after a distinguished career in metal is something that will always amaze me.

And what about Holy Diver itself?

The album fizzled out in the US charts at rank 56, getting to Platinum state much later – slowly but surely. It also had trouble getting noticed in Europe, with real impact only in the UK and Sweden of all places. Dio really got boots on the ground in Europe only with Sacred Heart, at a time when the star was already waning back in the US with sales coming down dramatically.

And should you call Holy Diver the best album ever of this powerful steamer called Dio? No, definitely not. But already very good and – for sure – it serves as a lighthouse. The record paved the way forward for the future and – in my book – much better, more powerful and rounded albums.

There is however not a lot of bad in there neither. Dio will just whack you over the head right from the start with the stunner Stand Up and Shout, followed by the classic Holy Diver (the title song).

This is followed by a few more kickers, having in the meantime become a solid staple of the Dio diet: Tracks like Don’t Talk to Strangers, Gypsy or Rainbow in the Dark, just to name a few. And apart from Invisible, there are no real fillers on Holy Diver. The whole record is really all about unleashing the power and energy of Ronnie James Padavona – the birth name of Dio.

If there is anything negative about the record, then that the track list was supposedly thrown together somewhat hastily. A better choice would have brought better quality for sure. The following albums are proof of the pudding in this respect.

Another point is that the mastering effort kind of went astray and the drums are too present to the detriment of the guitar work, which is a pity. Now, be this as it may, the overall result is still stellar and the album itself a fully rounded product.

By launching his very own flagship, Dio started to write Heavy Metal history. Holy Diver is the first of Dio‘s productions that for sure acted as a beacon to many other bands wanting to establish themselves in the same genre. This album should most definitely live on your music shelf. If you are a metalhead and it is not yet there, get it.

As proverbial proof of the pudding, the record made it onto the Old’n’Tasty series. Stellar. Oh, and be sure to check this original representation of Holy Diver as well. On acoustics, no less.