Heavy Metal is one of my favorite styles and passions in music. And one band having had a hand in shaping this passion is Dio with the superb 1987 record Dream Evil. This album played when the world still seemed in order, not torn asunder by some assholes trying to rearrange our lives. Or perhaps they did already, only we did not realize it. There was no internet and no cell phones to speak of back then. Still the good old iron curtain in place, which only fell after 1989.

What can I say, Dream Evil is probably one of the most memorable – if not THE most memorable – of the Dio albums. And back then it did not make all that many waves. It is much later that the actual quality of this record became apparent. To the point today that some bands claimed the record’s name for their own gig.

And indeed it hit the Swedish and Norwegian charts (!!) at relatively competitive levels – 4 and 7 to be precise. And kind of resonated across Europe much better than it ever did across the US, which was – at that time – the centerpiece of Heavy Metal and Hard Rock.

I guess our Northern European friends did not yet fathom the power of having a piece of metal for their main course. Came only much later with the Gothic and Death Metal bands flooding the barren landscapes of the North with some juicy metal slabs of material. And indeed at that time we metalheads were frowned at somewhat sharply.

And it is also the last studio album featuring Murray on the cover of a record. The Story of Murray can be found on a dedicated page on the official Dio site by the way. Now, who on earth is Murray? And I can assure you, it is not Andy Murray, the tennis man. Check out the picture below. ‘Tis the guy – the horned devil figure whipping chains on other illustrations. And the album art in general on this one is remarkably well done. I really like it. 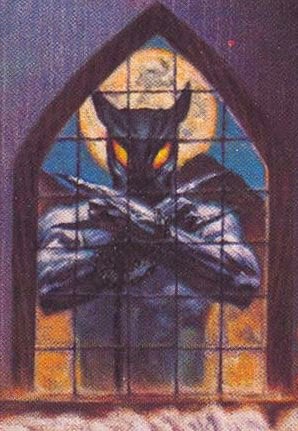 The music itself is indeed very good stuff! Perhaps on the DR side it would have needed a bit of a face-lift (or quite a lot to be honest..), but talking about delivery – stellar. And kind of subdued, not in the loud style of its predecessors. Scratchy and then again smooth (if smooth can be the right word for this kind of style..). Trademark masterpieces such as Dream Evil, Sunset Superman, Naked in the Rain, Faces in the Window, When a Woman Cries are concentrated in this here production. The list is long and almost encompasses the whole album. And of course delivered by Ronnie’s crystal clear lyrics and astounding voice range that never ceases to amaze me.

This record is also the last for a while with Vinnie Appice for a full length production. He kind of contributed to the next record Lock up the Wolves, but then did not really perform in that one – a paradox of sorts. But fact is he did not re-appear until the 1993 concoction Strange Highways (okay, okay – I get it. It is the one after next, but still…).

This is one of the very best productions of Dio and – amazingly – one of quite a few in a row. The first five or so of albums – like Holy Diver – were all in the top level department from a (then) Heavy Metal point of view. And Dream Evil turned out to be #4 of the pack. So, what can I say. If only I could travel back in time and attend some more of their concerts – knowing what I know now.

Editor’s note: The record successfully made it on the second installment of the Old’n’Tasty series. Congrats!