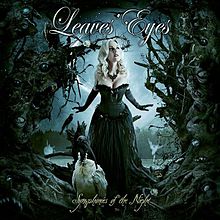 Well, I will be damned! Symphonies of the Night is actually not bad at all. Still some sort of compound brand of the Symphonic Metal universe out there. But much improvement over the Norwegian/German band Leaves’ Eyes last record Njord I reviewed some time ago.

For those who have read it, the flat delivery of the last record did not impress me much. Not much substance and not much of anything else. That is why I did not even bother to have a look at their go-between Meredead from 2011, for which some of my co-conspirators had some serious woes to tell us about as well. So, what a surprise when I realized that they worked themselves over and delivered something undeniably Leaves’ Eyes, but with a surprisingly brutal metal edge to boot. Delivering some quite classy Symphonic Metal in a Gothic robe to their audience.

Thus not surprisingly, Symphonies of the Night opened at not so stellar levels in the charts at first in Europe. A clear indicator that the last album(s) did not quite convince. However, in the US – so it appears – there has been a much better breakthrough than in Europe and THIS is quite surprising to me.

The growls improved too, whereas I daresay there are a few too many in this chili con carne without too much spice. Beauty and the Beast is good in this genre. But push it to the limit like this one and it will get in the way and become Shrek on a bad day. But by and large, Liv Kristine Espenaes and her hubby Alexander Krull have managed to turn this one around quite well.

The first part of Symphonies of the Night crudely taketh from a mix between Gothic, Symphonic (some) and Power Metal. Hell to the Heavens gets the album going strongly. Almost overwhelming Liv Kristine in a sense. A real good opener, I like it. This is followed by an equally rockingly spicy Fading Earth, which would make a Nightwish proud. Yet that one suits Liv Kristine better anyway – no contest there. Some interesting changes of tempi on this track. You will even find a short-lived riff of sorts in it – well done. Maid of Lorraine really suits the vocalist’s voice and I like the more epic style of that one. Complete with some brutal guitars, growls and symphonic interludes.

With the arrival of Galswintha the album takes a change of direction to a more folksy style and becomes even more blatantly symphonic in part. Getting in with the likes of Eluveitie (well almost…), but still true to their own trademark style. This song is quite furious too.

Saint Cecelia and Nightshade provide a welcome break from the former furious pace. Albeit it needs to be said that the former seems to go on forever. The rest of the tracks is a slower mix of Norwegian and English themed songs that are flowing through into a slow end of Symphonies of the Night, some of which reminding me of Xandria at times.

Are there still more negatives in this ocean of goodies? Yes, there are. For starters, the record still sounds awfully compressed. But this is a clean improvement over their last work, yet there is still a lot to do there. Also, some of the tracks are quite long winded (bordering on the never ending..). Something that Leaves’ Eyes need to address. And perhaps a word to the album art: Less cleavage and more substance or fantasy might be better the next time around.

I have been positively impressed with Symphonies of the Night. And this since I first started to listen to it. It is a complex record too, constructed of different styles, flavors and nuances. A clear step up from their past work. I would even say that this is the best album so far that Leaves’ Eyes produced. Well done and I am looking forward their next that is said to be released sometimes in summer 2015 under a new record label – AFM Records – to boot!