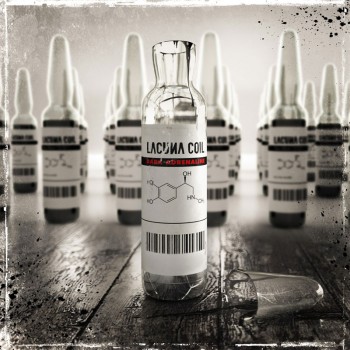 This is how the 6th studio album Dark Adrenaline of the Italian band Lacuna Coil presents itself at the opening. And with some nice and very metal tunes to boot.

Or should we say ‘would like’ to present itself?

Because on the other hand, whilst definitely rocky and straightforward, the record kind of sounds like Evanescence in The Open Door without lithium. Yet again, Andrea Ferro‘s Amorphis-esque interludes do undoubtedly add a lot of crunch to bring that metallic counterweight to bear.

And this is how best to describe Dark Adrenaline: A rocky, a stormy way of presenting Gothic Metal, in a somewhat industrial robe, pleasing to them masses that judge ye so harshly.

Evil tongues say that the annoying pop edge in these tunes is the crime of the master of production Don Gilmore. Who – so the lore goes – acts as supreme sensei of drilling this stuff down into political correctness, until you can no more.

But they all deserve credit anyway. Because this tactic led Lacuna Coil to win the Best Album Award in 2012 of the Metal Female Award Fest.

Yet, the poppy fallout clearly shows: The generic billboard charts did not show all that great of an acclaim for Dark Adrenaline. With the exception of the US, Canadian and Italian charts that is, which came in at reasonable levels.

Also, the solos are few and far between. One of the better ones – albeit short – found itself into The Army Inside. Luckily they have Scabbia with her crystal clear vocals, which kind of save the day. Without her there would be trouble for Lacuna Coil – for sure.

I like Trip the Darkness as well as Against You. Those are of the crunchy kind, clubbing away like a monster in the dark coming after you. Kill the Light has still enough grump in it to qualify. Intoxicated has its merits too, even if it sounds like an .. intoxicated and super-charged Dolores O’Riordan at times.

And Holy Fucking Cow! How is it possible to dissect R.E.M.’s perfect track Losing My Religion in such an atrocious way? Mostly, those remakes of preexisting songs just plainly suck. Not sure where they have gotten THAT idea from. Good grief!

In the end, Lacuna Coil, fronted by Cristina Scabbia and Andrea Ferro, surely created something fast and of the metal kind. Yet, Dark Adrenaline sometimes has this tendency to gripe. This foray into the electro-pop genre sometimes is just too strong. With best wishes from Amaranthe and their ilk.

I would call Dark Adrenaline a production with potential. Difficult to pin down. But my gut tells me that with a different producer, the dark edges and sharp points would have been more prevalent. For the moment, this record is too whitewashed to be true to Lacuna Coil‘s abilities. And in truth, at first it does not sound that way, but is becoming apparent later in the album.

This creates an amalgam of tracks linked into each other that will be okay in the car, to follow you through a lengthy drive of some distance. But not for a thrilling listening session, rocking you around the music hall.

Their success however speaks for itself, and their sales and overall popularity are still pretty high. No doubt, if you produce club ready-made pieces that the Master DJ just can throw on the disc.

From an overall standpoint however, this album does not quite cut it. This band can do better. Yes, still a lot better.