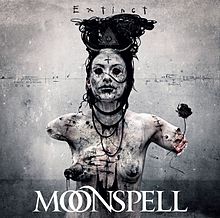 Whoa! What a nice slab of metal! When I first started to listen to the 11th full length album Extinct of the Portuguese band Moonspell, it did not impress me much. The record just did not stick. But then their tune started to get glued to the inside of my eardrums. And slowly, but surely got into my mind and bloodstream somehow. What the hell? Some fucking voodoo right there.

The more you listen to the album, the more it grows on ye. Mind you, it is not ‘conquer by attrition’, but you need some peace and leisure to really listen to what is there. Extinct is actually more of an experimental piece than anything else. Feeding darkly upon a large variety of styles out there. But without allowing the band to be pinned down on any one of them. Away from the dark foreboding of Night Eternal, this album takes a more direct route to the theme. The lyrics just go straight for the target.

This creates a surprising medley of elements ranging from Symphonic Metal to the deep, dark recesses of Black Metal. And for once here is a metal gig that did not forget its roots. Delivering friggin’ riffs whenever they can, never letting YOU forget that fact neither. Well done!

And all that is of course typical of Moonspell, being well known for serving courses of different flavors every time they release a new record. I salute their ability of innovation! Being off the beaten track is their trademark in music. They excel at it.

Of course, the purists are already foaming at the mouth that this is not metal. And nobody should allow vinyl prints of Extinct. Others uttering not very qualified remarks about it and the band’s origin in general to boot. Well, this happens if you got blinkers to each side of your head. This record here is very complex, full of difference and – I daresay – laden with controversy. To their defense, the production is a tad overloaded with elements of different kinds. And those make it difficult to really fathom the quality of this here caldeirada of the Gothic and Dark Metal kind. But I dare you to really listen to Extinct first and THEN judge.

This sets the stage to one of the most surprising listening experiences to date. Very varied, flawlessly executed tracks, most with clear voice, some with growls. Growls? Hmm. Nope: More pseudo kind of growls, as in lyrics uttered in a menacing way. This has a surprisingly profound effect on the listener. Legion are the bands that like to snarl at you like dogs kept on a short leash, without making too much sense. And without too much impact neither. So here Moonspell serve a welcome variation.

The first track Breathe (Until We are no More) starts very metally. Drums, bass and endless riffs going on in the background. Very dark and foreboding. Extinct (the title track) is more rocky and straightforward. This appears to be Moonspell’s grungy attempt to let us know about their way to play some sort of Melodic Death Metal. As said before, the grunts are of the no-grunt kind. But in their unique style, the croaks are remarkable. And – to top it – the track contains a stellar solo.

Medusalem is, well, not Metal in this sense, but a nice, fast paced tune. All this with an oriental taint to boot. The Last of Us has been so streamlined and cleaned to utmost political correctness that it almost hurts. To me this song is THE disappointment on this album. They probably did this to soothe the anger of the mainstream crowd with all that, and it earned them a video. Well, gosh. A pity that one, but what can I do?

The funkiest track on this here collection is La Baphomette, in carefully murdered French, no less. The lyrics are at zero level quality, but the overall taste and feel of this track is – whilst nowhere near metal – quite endearing. Of course and as is often the case, it is the bonus tracks that hold jewels. Or – in this case – the extended edition. The song Doomina is really the closest you would come to a ballad – a very dark ballad at that. But then, everything is dark and gloomy on Extinct.

If you are willing to descend into Moonspell‘s abyss of unspeakable horrors of life that is about to become Extinct and where the future desolation landscape is grey, foggy and filled with monsters, here is an album for you. And don’t let the album pull you down, it is only music after all.

For those who are ready for this journey and can maintain an open mind, go ahead. And you will find very varied, high quality tracks in there with surprising edges, turns and corners.

You will not regret it.