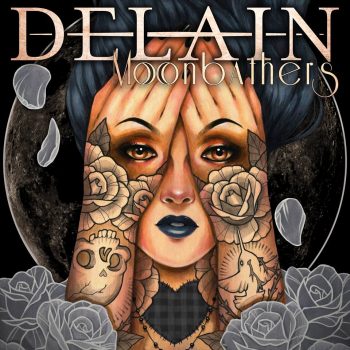 I’ll be damned, time flies really fast. It is already ten years and five full length albums down the road for the Dutch Symphonic and Gothic Metal band Delain. Now crowned with their latest record Moonbathers.

Already their very first album Lucidity impressed me greatly. To find a debut of an unknown band at such a level of professionalism was astounding. The whole record exuded a freshness and carefree attitude that – sadly – started lacking on future albums.

And of course the undeniable vocal powers – then and now – of Charlotte Wessels contributed greatly to the success of the band. April Rain – their second – followed in that same vein. Both offerings were prominently spiced up by Marko Hietala from Nightwish. And it is indeed his contribution early on in Delain‘s career that set this ship on the course to glory.

But why are we revisiting the past?

‘Cause from then onwards things started to decline. I daresay: As Marko’s influence started to wane, Delain‘s style slipped more and more into mainstream. This became visible in We Are The Others – albeit only slowly – and then accelerated with The Human Contradiction back in 2014.

It is funny: This whole development coincides with the same directional change Within Temptation and – in a way – Nightwish took towards the safety of the no-risk zone. I won’t hide that I am waiting for the former band’s newest offering with a lot of trepidation.

And there just might be some influence, as Martijn Westerholt is part of the family, his brother being the driving force behind WT. The outcome is unfortunately that the big bands in the Symphonic Metal universe have become very similar in their deliveries. It is this sort of whitewashed, non-experimental Gothic and Symphonic Metal goo for the masses that we would like to see LESS of. And the question is:

Did Moonbathers give in to the temptation or deliver this additional crunch?

Well, at first sight, the album is quite loud – as in the continued loudness war. It also comes across as fast and much more epic, compared to earlier offerings. But – at the same time – mastered to a very fine point. So that no element will escape or be a nuisance.

I was a bit disappointed by the same-same, but different approach the band took when constructing many of the tracks. You will also find a tendency to a more poppy and aligned tune. On the other hand, any of these songs can stand by themselves easily. Clearly, the whole composition – more than ever – is tailor-made to Charlotte Wessel‘s vocal contribution. And with good cause: Her increased maturity really impresses from start to finish.

Alissa White-Gluz (Arch Enemy) again graces us with a small blurb in Hands of Gold. Interesting how they pump up the crunch, once Alissa comes on board, away from the overall amalgam. The first track is easily the most powerful one, galloping away at a pretty reckless speed.

It is again remarkable how a lot of that is similar to Nightwish and – in part – to Within Temptation, but then again they try to get in some progressive elements – as in the Glory and the Scum. This track probably gets the crunch prize of Moonbathers. As ballads go, I can recommend Chrysalis – The Last Breath. Charlotte really lets loose on that one with a lot of variation.

It was an interesting marketing move to issue Lunar Prelude as an EP earlier in 2016. This in lieu of releasing expensive videos only, without generating extra value. So, it comes as no surprise that Suckerpunch and Turn the Lights Out have been added to this here album.

Sometimes there is some experimentation on Moonbathers. Their foray into Power Metal terrain in Fire with Fire – for example – is pretty good. The way they hack away at it reminds me of the bigger names in this genre, but fails to deliver the real crunch. But then, they probably did not intend to do that anyway.

I was surprised by the decision to add the Queen cover Scandal. And they pull this off pretty well with a poppier, but also juicier, more epic version of the original. Again, Charlotte’s contribution on that one is outstanding.

Now, I let you be the judge on Danse Macabre. The Cranberries-esque howling kind of got me puzzled and – I daresay – it takes a lot of allure from the track itself. Same goes with The Monarch. I felt kind of left in the lurch, expecting a closing fireworks of sorts. But this never came, the track just kind of ends and that’s that.

Moonbathers is not a bad album and it is definitely Delain as we have known it over the last few years. All elements there, all t’s crossed and i’s dotted. In essence, you will find a technically high standing set of tracks that are done and constructed the way many believe Symphonic Metal ought to sound.

That said, I am missing the crunch, the unexpected, the unthinkable. In its present form, the album follows the path of least resistance into the mean mainstream. It listens well on a drive down to the beach or as background music.

But did it blow my socks off? Not really. And this is a pity.