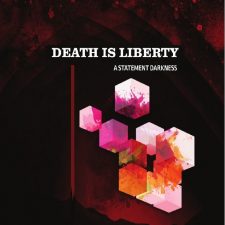 Ah, a funky, punky, rocky sound pouring out of my loudspeakers, annoying my neighbors. And I am confused. On the one hand this is almost – like – dizzyingly gruesome to listen to, it is such a wild jumble of elements. On the other hand the latest record of the Finnish band Death is Liberty exerts an almost magic pull on the hapless listener that is difficult to ignore.

Their debut album A Statement Darkness serves you with a mixture of Alternative and Progressive Rock that is just amazing and amazingly well done. As always, the bands stepping out of the box often produce good to very good content.

No difference here. And they clearly are off the beaten path, out of the vile mainstream and out of control.

Death is Liberty will serve you with a very varied and spicy jambalaya, the pressure not letting up until the last note is squeezed out of their instruments.

In line with the above, Death is Liberty states that they have little regard to adhere to styles that are erring about the Rock and Metal universe. The band wishes to – and I quote “…compose and perform music without boundaries…”.

And this is exactly what they do in the record.

Consequently, every song is different – lyric-wise and musically – rendering this album highly interesting. Indeed you will never find a boring moment when listening to A Statement Darkness.

But, and as hinted before, the album is a difficult and complex listen, and it requires your attention. It is also worth every second of your time, though.

Death is Liberty was created back in 2009 in Jyväskylä in central Finland. A four-man band, they issued a first demo EP in 2011, and now unleashed their debut full length album.

Now, is this something you should devote your time of day to?

If you can stand complex tunes and you like outstanding prog and alt rock with a psychedelic twist, then absolutely. Of course, if you are a fan of other musical currents, give it a listen first.

All others, consume irresponsibly. Really, really good stuff, I like it.