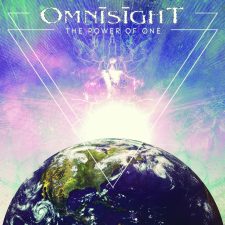 There are those who will bitch and moan that OmnisighT‘s latest EP is a terrible, glaring and disjointed mess. Whereas others will insist that we got ourselves a masterpiece of outstanding Progressive Rock and Metal. So, in other words, we are up against two extremes. And which one of those will this record turn out to be?

The Canadian metallers OmnisighT and their sophomore EP The Power of One do indeed solicit emotions. Complex, confusing, scratchy and straight in your face; these would be the attributes to distribute for this disc. That the record is loud, even extremely loud goes without saying.

OmnisighT feature a mixed prog platter of Soundgarden’s freshness, the psychedelics of Dream Theater and a smattering of Leprous-ish djents. All of that surrounded by a solid portion of real serious Hard Rock and Heavy Metal.

With guitar work shredding up and down the fretboard, and some pretty solid drum work added to the fray. OmnisighT did not go the easy route neither: Lyrics and songwriting present a daedal and intricate design, backed up by sturdy and professional musicianship.

The OminsighT project started out as a two-man gig that however fleshed out quickly into the current full setup. They then went ahead and released a first full length album in 2012, followed by a live compilation in 2016. In between albums they were busy touring, getting into finals of the Wacken Metal Battle Vancouver and sharing the stage with bands like Unleash the Archers, home of the screamy Ms. Slayes.

So, is the record a mess or the nirvana of eclectic prog power? In truth, it is a mixture of both. Clearly frazzled around the edges with some dizzying notions of serious disorientation, The Power of One nevertheless displays technically high-standing and highly complex Progressive Rock and Metal. Pulling such a record off is no easy feat and a tribute to the band’s musicianship. With hooks so big that the good Captain of the same name would go pale with envy. But then, this is what I came here for, too.

But why don’t you just judge by yourself:

This video and many others can be found on the RockmusicRaider YouTube Channel. Check it out and subscribe.