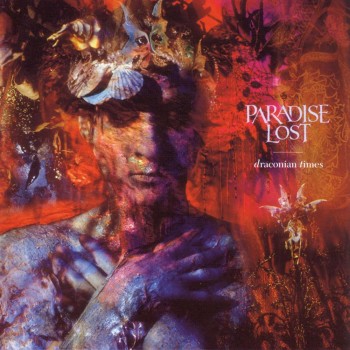 The 5th studio album Draconian Times of British metallers Paradise Lost takes off to somewhere. Only we are not sure where this is all going. The tune they present often sounds like Heavy Metal, as in Metallica of the Load era during the mid ’90s, albeit at a slower pace of sorts. And this makes me wonder where the real Doom Metal element escaped to.

Further, for a doom album proper, the style thrown at us is almost too lively. So here we have a record that moves down this Gothic Metal road that became more and more important in the late ’90s and early ’00s. Draconian Times is – in this sense – a strange animal indeed.

Now, what kind of album is Draconian Times really?

First, it is a non-album, in the sense that the theme or thread has gone missing. The band produced a somewhat disjointed string of tracks that make up this album, covering a variety of subjects. At least one track is laden with last-minute elements that cease to make sense when looking at the lyrics.

This is also where the disconnect kicks in. With a part of the fan base stating that this somewhat cvltish album is setting the tone for future Gothic and Doom Metal bands. I am not sure where this conviction comes from, apart from the fact that Paradise Lost have indeed helped shape the path to glory for both genres. Not to forget, that the band – by their next album – veered off their beaten path big time, only to come back to real doom with their latest 2015 album. And back in time they did not need five minutes to pronounce the word die neither – as witnessed in The Plague Within.

On the other hand, the Gothic and Doom Metal mix Paradise Lost display in this album gives this whole production a very special metal flavor. In some ways, this record sounds similar to what Amorphis just produced with Under The Red Cloud – a different style supposedly, but still. But then again, with Simon Efemey in the production seat, this could explain it, himself having worked for both bands repeatedly. And the grunge injected into Draconian Times for some of the tracks is on the remarkable side.

And the international performance and quality?

Draconian Times did chart relatively well, compared to their former and also following albums. And there are two ways to look at it: From a brand standpoint – Paradise Lost being the product – this is a success with the UK, Sweden, Finland and Austria all now showing a result for the first time. Looking at the absolute chart positions, this is another story entirely.

In all however, there is definitely a superior quality to this album. Technically, lyrically – all there (okay, some exceptions apply for the lyrics..). I really love the great crunch displayed on all tracks. The guitar work well executed, drums on the more refined side.

Mind you: This will be nothing stellar, like in seeking new heights forever with superior instrumental prowess to keep the fans on their toes, as other bands do. Vocals are powerfully delivered too. And – apart from the urge to deliver a Hetfield copy to all vocals – well varied, slaved to the occasion as the track commands. Nick Holmes definitely sounds a bit better refined, compared to Paradise Lost‘s more recent concoctions.

The track list starts nicely with Enchantment – one of the rare keyboard interludes on Draconian Times. Hallowed Land drones on somewhat unremarkably until the solo kicks in. Holy cow, this will get attention your right away.

All tracks are powerfully delivered for the first quarter of the record with no real doom apparent. Forever Failure is definitely the best track on this here toxic brew of convoluted emotions. I really liked the inclusion of some excerpts of the recently, newly wed Charles Manson, stating way back in time that he did not understand what sorry means.

The lyrics on Forever Failure seem somewhat disjointed compared to the verbal passages, by the way. Interestingly the excerpts are NOT part of the official music video released by the label. This seems to fit with Nick’s statement that these passages were added …. because they sounded sad. Damn.

After that, the album loses steam big time, turning into an amalgam of same, same, but different. None really stand out, but none are fillers neither. Shades of God, Hands of Reason and – to a lesser extent – Shadowkings will certainly retain your attention.

So, in conclusion, should you own this album?

The jury is out on that. If you like your band collection complete, then yes. If you are debuting in doom, then no. Yet, the album mixes a rather bold copy of Heavy Metal with a low-energy whiff of Doom Metal. Plus a very powerful precursor version of Gothic Metal, but this does not mean the quality is bad.

It is one of the most remarkable discs Paradise Lost ever created and it deserves respect. Even if nothing on Draconian Times really gets me off my comfy rocking chair. It is nevertheless a good, solid metal album with nothing much amiss. Not much in terms of excitement neither. And this is a pity. A real pity.