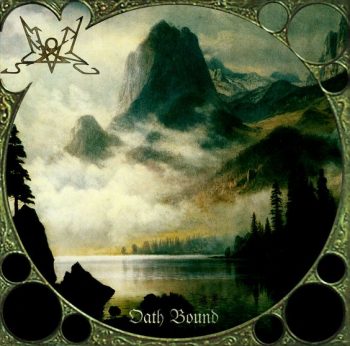 Some voices out there declare that only new – as in brand new – records can get a review. To go back and contemplate good ‘ol tunes from the past is forbidden devilry. To be squished quickly, blown to smithereens with this mighty Thor’s hammer surely in their possession.

And you know what?

From a click rate or sharing standpoint, this is absolutely correct. But RockmusicRaider likes to do things a bit differently sometimes and break stuff, if need be.

And besides, now that I have the scent of Summoning in my nostrils after With Doom We Come, it is time to lose a few words on their 2006 epic and 6th full-length record Oath Bound. The one that – after five long years – followed the much lauded and also equally much hated 2001 epic Let Mortal Heroes Sing Your Fame. And – by the same token – ushered in the seven-year-long wait to Old Mornings Dawn.

These extreme delays between records are a mystery to me, by the way. It always throws me how the Austrians defy the 2 year rule to publish new material, lest your tune will have become unknown and fans move on. They simply come in years too late with new material – and succeed.

Oath Bound is also the record our friends from Utah – Caladan Brood – really should have latched on to. Because – as a fun fact – their record released just prior to Old Mornings Dawn. So, what I’ll never understand is this near-miss they produced. Because Echoes of Battle more resembles Old Mornings Dawn than it ever did Oath Bound. Oh sweet conspiracy. And don’t we like them, especially the ones we really don’t want to solve.

Yet at this time back in 2006, Summoning were clearly playing in a league of their own.

Their special brand of electronically charged Atmospheric and Melodic Black Metal was pretty much unchallenged. One could argue that Burzum plowed these dreary fields as well during their Filosofem era in the ’90s, but I would tend to disagree. If anything, then only just.

I always wondered how ever they got away with a clicky, terrible drum machine and an often atrocious mix that you just cannot fix with the mastering neither. Loaded to the brim with sometimes badly synthesized elements to boot. But then again, this gritty style caters to the rebel tendencies of many Black Metal adepts.

And it does provide that sound to identify Middle Earth with, doesn’t it?

But here we are, and the outcome with its dry rasps is almost otherworldly in its allure. Oath Bound really latches on where Minas Morgul left off some ten years earlier. The epically charged atmosphere feels invigorating. Ice-cold vibrations of anger and fury, armies of ogres marching towards you. The sounds of war, complete with booming drums and the war horns drive this home beautifully.

You’ll get full immersion on that when Mirdautas Vras lets loose. You know the one supposedly written in the Black Speech of Mordor. Long live the memory of Tolkien and his lore of Middle Earth, complete with an imaginary language.

The way Summoning introduce a variety of folksy instruments into this Black Metal mix – admitted by keys or not – is beyond intriguing. Now, throw in the clear voice monologues that seem to emanate straight from a bad, cheesy movie. Then flavor with a clear voice chorus that kicks in at no notice. And this creates some sort of a devilish broth from hell that is not easy to resist.

You’ll feel the great, misty landscapes in Across the Streaming Tide. And experience the marching armies and war cries in the aforementioned Mirdautas Vras and Bauglir. And on it goes, until the absolute epic Land of the Dead of almost 13 minutes strikes hard. I reckon this to be the best track that Summoning produced so far.

So, in essence, Oath Bound harnesses emotion in a way its two successors were not able to. And this is a crucial ingredient for any good record out there.

Summoning tried hard to inject some of that back into their tune in With Doom We Come. With some success that surely topped Old Mornings Dawn, but did not get close to this record.

In the end, Oath Bound remains unmatched to this day in the band’s discography. By reaching back to the roots of Summoning‘s style, the band managed to get out of the watery direction its predecessor took, and back into the land of plenty.

As always, this has a price of course. And the price is the lack of innovation. But then, sometimes it is good to bank on things that are known to work. And for Oath Bound the outcome proves that point beautifully.