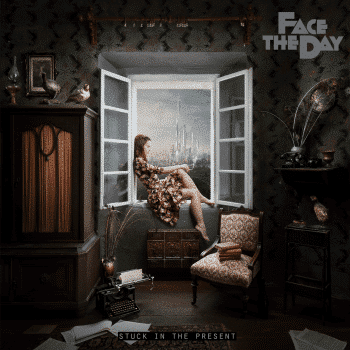 The RockmusicRaider deck crew sometimes likes to support little known bands. Often so far under ground that they are hardly visible. And some of them want to be known, whereas many others don’t. On many occasions, the latter dwell in the more obscure realms of the metal multiverse. The ones with a purist streak that goes way beyond mere idealism.

And, I daresay, this practice is not the most intelligent way for a blog to get a gazillion of hits and a ton of them YouTube likes that will make you stinking rich. But we do have a somewhat stubbornly idealistic streak over here as well, which we love to hate.

So in this sense, if you lust for a piece of soothing, yet refreshingly alternative Progressive Metal and Rock, then you may want to taste this one.

Late in 2018, the Czech outfit Face The Day released their newest concoction Stuck in the Present. And the tune they offer indeed is what’s written on this specific doctor’s prescription. The one against depression, kind of along of their theme.

Face The Day offer this alluring mix of Gentle Knife complete with a saxophone. Hints of Steven Wilson and his alma mater Porcupine Tree. Sprinkled with the corny peevishness of the likes of End of Green, minus the industrial influence. And – maybe – with a slight alternative touch on the fringes of their track list. So, an interesting slice of today’s Progressive and Alternative Rock and Metal scenes.

Well, all this shameless name-calling tells us that their tune is certainly nothing new. Truly so.

Yet, the overall arrangement is quite artfully done with some pretty refreshing variation that sits well with the overall energy and direction of the album.

Lauded should Face The Day be, though. For not joining the djent division outright, that is. Instead Stuck in the Present for instance – the title track – presents you with this strange over-compressed mix of present-day Haken and late Leprous all in one go.

So, have we got a case of same-same, but similar?

Kind of, but not quite. The band is clearly not afraid to steal, where nobody stole before. By doing that they add a sure-footed heaviness to their tune that effortlessly mixes with the more airy ambient, acoustic and folksy parts.

Even if in some of the tracks, things don’t quite fit, like a puzzle still roughened around the edges. In other words, the whole mastering business got us a frazzled touch and feel in a way. And the tracks often have a dangerous smell of Hand. Cannot. Erase. to them.

This is part of the ugly sign of those one-man shows, where you got multi-instrumentalists calling the shots. Quite often their tune kind of sounds a bit disjointed, whilst the real talent potential keeps on peeking in through the windows. And – lo and behold – Face The Day indeed basically consist of Martin Schuster (ex Mindwork) on pretty much everything, with the added help of Fillip Kittnar on drums. Plus a few guest musicians for some specialty parts.

Which does – of course – not withhold them to write excellent pieces like With Faith on my Side with almost unplugged beginnings. Until about mid-point, where the track disintegrates into metallic, industrial realms with a pretty sturdy riff / solo thing right there.

Or the somewhat bombastic saxophone solo on Settle Down. Using a saxophone on a rock piece is always a trifle eccentric and can turn sour quickly. Not everything matches Gerry Rafferty’s Baker Street. Yet, on Stuck in the Presence no such fears need exist.

So, in essence, Stuck in the Present saddles you with this fearless complexity that the aforementioned Haken excels in. Mixing a medley of styles wildly together, with ambient acoustics and refreshing rock and metal solos, gives this record that trifle Habanero power to make it stand out from the crowd. Or is it just smooth Chipotle, yet still hot to the touch? Whatever your view, it is definitely a tough stand, in a genre that starts to be crowded by many, and dominated by only few.

Face The Day‘s new record has this tendency to get stuck to your brain and make you come back for multiple listens. And that is a good sign for the emerging Czech Progressive Rock and Metal scene.

We will be watching on what emerges next from this band.