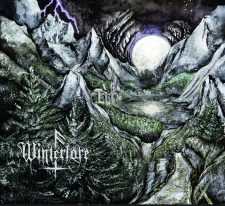 Fancy a juice dripping slice of Black Metal today? Look no further: Winterlore – signed to Slaughterhouse Records – and their self-titled sophomore album will deliver. The band features a corny, earthy and very varied brand of Black Metal just this side of ambient.

Melodic enough to please, but still sufficiently sticking to its unholy traditions without pissing off the fan crowd. Changing tempi, great riffing, some isolated solos and the sporadic use of unusual instruments – the flute for example – will not let you tire of the record. Add to that stellar rasps and some clear voice chorus lines and you got a very unholy brew that might just turn these crosses upside down. For a full 42 minutes or so of great Black Metal.

Once into the record, the similarity of some parts to Caladan Brood – rasps and all – is striking (without the sadded drum machine, that is). And for good cause: Cody “Sven” Smith as Thorolf and Jake Rogers as Helgrim were actively involved in the creation of this here album. Whereas the latter left Winterlore to concentrate on other projects, specifically … Caladan Brood and the Heavy Metal act Visigoth.

The album is however by no means a copy of anything, but really a standalone concoction of very good and almost epic quality. The recent addition of R. Sodomizer (alias Rick Augino) for sure adds the necessary level of spice to the guitar work and overall dark ambiente.

Winterlore formed way back in 2004 and survived through a lot of trepidation to the present day. Their base is Salt Lake City – the HQ of the mighty mormon church, no less. I always have to chuckle when writing about Black Metal bands at this location. Somehow, I have this vision in my mind of a white-shirted and clean-shaven missionary trying the wrong door and ending up in the band’s quarters. And then what? You be the judge.