You are a metal fan, right? That is why you are here.

So, have you ever tried to listen to Enya? Yes, the one of the surreal, kind of weird, ethereal melodies and soft tunes. Not metal at all, you know.

Now, mix three parts of Enya with a shot of Caladan Brood, together with 2 parts of Cradle of Filth on steroids (meaning: Dani Filth’s annoying screams amplified times five…). Then throw in three parts of Ulver and one psychedelic part of Suns of Thyme. And thus you get M, the latest and best of Myrkur. And no, this has nothing to do with James Bond and his 007-ish being. But horribly shaken, not terribly stirred it is indeed.

Interesting to see how she tries to morph from pop queen – kind of a copy of Taylor Swift – to something much more sinister. And it is this image of the blond, sweet girl going dark witch on you in a second that is strangely alluring too. Blondes have all the fun and cannot be bad, right?

I admit, I was taken aback when first listening to this album. This is a strangely attractive mix of ethereal tunes and screeching, delivered by somewhat subdued screams that all of a sudden assail your eardrums.

Again all that supported by a well structured selection of musical instruments. Slightly cacophonous in delivery, but very skillfully executed. Then again interspersed by some guitar riff taking off all of a sudden. Not at all the usual dreary beat that you get from Black Metal outfits, but something fresh yet aggressive, varied and never boring. But more to that later.

M is classified Black Metal! But should it be?

The disk features a mighty strange brand of Black Metal. And definitely nothing in the traditional sense, that is for sure. Sometimes Myrkur‘s tune might sound like it, but M ranges from Folk Rock to Psychedelic Metal. Maybe we should just call it Progressive Black Metal and be done with it. There are so many styles in there that we will wear ourselves out trying to classify this.

And by Loki, I continue to be amazed by the virulent hate mail coming from the Kvlt purists generated by Myrkur‘s first full length studio album. Some pretty stupid remarks out there, too. Looks like Amalie Bruun touched the nerve of the unholy fucking grail of Black Metal by producing something different.

A crazy blasphemy that requires eradication in the eyes of its unholy beholders. But then, let’s remember that the traditional Black Metal bands will not stop doing what they are doing, just because M of Myrkur appeared at our mutual doorsteps. So, the traditional Black Metal scene is in no danger to evaporate because of this. And never forget, controversy sells – and sells well indeed. So the haters will actually propel the popularity of Myrkur to new heights.

And yes, M sounds somewhat like Ulver – the Norwegian Wolves – in some parts. No fucking doubt, ’cause Krystoffer Rygg – also known as Garm (named after the hound guarding the gates of Hel) – who founded the latter, got involved into the former. Thus, to accuse Bruun of copycat sounds like a total joke, given the influence at work. The aforementioned Caladan Brood stepped much closer to this very special abyss vis-à-vis Summoning.

But back to Myrkur and M: 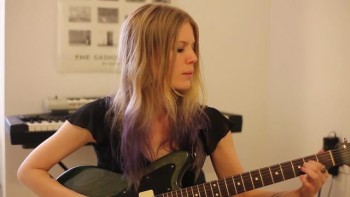 in the Black and Death Metal scene. And this for the album and the live act.

Christopher Amott (co-founder of Arch Enemy and brother of Michael Amott) lends his considerable riffing prowess to the band in Mordet. Drum work made by Øyvind Myrvoll (Nidingr) and Morten “Teloch” Iversen (Mayhem, Nidingr) on guitars. This creates a quality of this production that is frankly remarkable.

M features a refined song structure that is very much apart from the usual mainstream. The dissonance and abrupt changes in tempo and mode will for sure catch you off guard. The entry track Skøgen Skulle Dø for example will surprise you with a medieval folksy start, just to turn to screeching out of the blue and ending with psychedelic elements.

It is this weird concept that actually is one of the most alluring elements of the album. A moot point – by the way – to speculate if it was intentional, or just happened to them because they are not able to build a decent song structure. And frankly I don’t care, which theory is correct.

The whole structure of the album itself reflects Amalie’s persona. This is how that sounds in her own words and I quote: “I feel a strong sense of being divided into two, not one whole. A side of light and a side of shadows battle within me. And sometimes a disassociation to reality. A disconnect to the normal world and to what I am.” Unquote.

A very acceptable or even commendable mixing and mastering effort roundly accompanies M throughout the production. I would have appreciated a more refined and crisper sound, but this is in the ears of the beholder. A minor issue.

M manages to create this weird atmospheric feeling of dread, making you want to look under the bed. And around the next corner to check if some sort of hairy muppet monster with sharp teeth is lurking somewhere out there in the shadows. And skillfully done by Myrkur, too. All by keeping you constantly on your toes with crafty dissonance. Alternating folksy parts with old style black metal and sudden screams, when the black witch strikes again.

Sudden riffs and solos appearing around every corner, piano interludes when there should be none, out of the ethereal, atmospheric zen of soft sweet tunes. And all that condensed to some 37 minutes of atypical metal terror. Most of it not even being metal at all, wafting over airy landscapes atop the somewhat androgynous voice of Amalie singing to us – suddenly bursting into startling screams.

Like a musical Blair Witch Project of sorts, making you try to escape through dark woods, but to no avail. And just for this M deserves a prize.

Until that happens, M just made it to number 1 in the 2015 Top Ten Records. Not bad. And not to mention the Intermittent Digest – Tome III. That is where they appeared on, too.