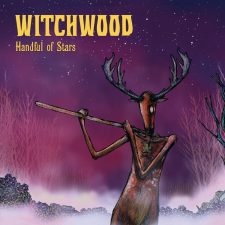 What? A transverse flute embedded in a Stoner Rock piece? Now, this really stopped me cold in my tracks. So, would this be Ian Anderson and his gang active in progressive retro-rock? Not likely.

But perhaps they should, given that they were one of the pioneers of anything prog back then. But it is indeed not them playing, but the Italian band Witchwood. And they just unleashed their newest and second release A Handful of Stars.

The band sports a somewhat blatant mix of Jethro Tull meets Uriah Heep that nevertheless points straight to the ’70s. A time, where not only rock was born, but the directions were set for metal, too. And they really excel at their Progressive take on Stoner Rock from way back in time. An interesting mix of styles and elements that has this tendency to pull you in and not let you go.

Witchwood got to see the day of light back in 2014 after the close-down of its predecessor Buttered Bacon Biscuits. The band released Litanies from the Woods in 2015 and is now following up with their latest record.

A Handful of Stars and its 45 minutes of airplay best stands as a follow-on to last year’s album. It features three new tracks, one re-write and two (!) covers. Now, adding covers is always dangerous and risks to incite the ire of die-hard fans over the originals. And oftentimes they are right, the animals.

But never fear: In this record the cover interpretations are pretty well done. The first one being Flaming Telegraphs from Blue Oyster Cult and the second Uriah Heep‘s Rainbow Demon from their 1972 disc Demons and Wizards.

Witchwood have not just tried to recreate this undeniable ’70s look and feel, like many others before them. To the contrary, they threw everything into a mixer and added some wind instruments, a trifle Southern Comfort and a whiff of weedy, psychedelic infusions.

The outcome is a great way get this old style back to life again.

The record is a pleasure to listen to and for sure will whet your appetite for more. Good stuff.