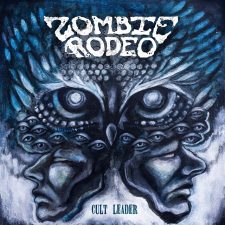 Here I am unsuspectingly enjoying a lazy, sunny Saturday morning, kind of surfing around on the metal and rock waves sent to my review list by folks. And then – whoom! – the groove hits big time.

Welcome to the fuzzy, stoner-ish, grungy rock world of Zombie Rodeo. A band joining us from the cold North of Finland. Okay, it is not THAT much North, if compared to the real North. They’re hailing from Helsinki. But still, North enough.

The band will release their newest and fourth EP Cult Leader mid-November of this year. Some of that brew seems to step straight out of the ’70s. Complete with the (horrible) backward keyboard sound that we love to hate.

And a distinct Black Sabbath whine attached to it at times – as in Ozzy. But contrary to the latter, this is corny, meaty stuff pouring grittily (and mercilessly) out of your earphones. With a mighty portion of its very own groove, like a friggin’ freight train.

Now – mind you – this is by no means something we haven’t heard before. But it is again the sum of all parts that wins the prize. The stoner look-and-feel is always there, but all of a sudden they add grunge to the grit.

Then again going kind of doomishly bluesy on ya in a heartbeat. This adds just the right amount of pepper to the sauce that is the essence of this record.

To make it complete, all that juicy piece of rock gets forcefully delivered by the lead, so that you will keep listening until there is no more.

Now, go ahead, don’t be a stranger! Get a copy and let her rip. Very loud, of course.