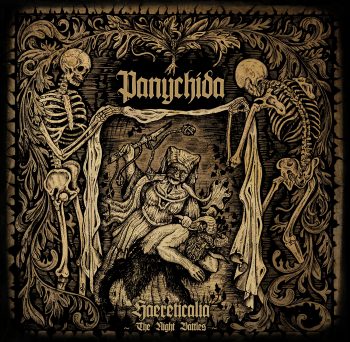 When starting on the newest album Haereticalia – The Night Battles of the Czech outfit Panychida, this just sounds like any other Symphonic Metal band trying out their often frugal orchestral muscle on the unsuspecting fan crowd. Often forgetting about the metal sounds that (should) make them tick.

The intro waltzes away like something straight from Central Europe, somewhat of a baroque-esque classical style with a slightly Austrian touch.

Which makes sense to an extent.

Panychida are joining us from Plzeň in the Czech Republic. An area, more known for its beer, classical music (not metal, sadly) and loads of history. So, you kind of wonder where this is all going. Until the evil twins from Shining step in with a monologue, setting the direction straight.

The Malleus Maleficarum is loose on Haereticalia!

No, this is not some sort of a copy of the latest of Cradle of Filth. The theme centers around the Benandanti – a group of mystics (also called a fertility cult) active in today’s Italian Friaul region during the Renaissance and early Baroque periods. Not quite surprisingly, the cult got to the attention of the Holy Inquisition with all its unhealthy and unholy consequences. Interestingly, the album also links Livonian werewolves and public events like the Perchtenlaufen in the Tyrol region. Haereticalia mainly bases itself on the work of one Carlo Ginzburg released back in 1966.

In consequence, the lyrics are strongly aligned to the cover story too, and amazingly well done. Nothing of the weak and slightly silly lines other Pagan Metal bands usually like to decorate themselves with. I like the way they use spoken, clear voice monologues and theatrical elements, then hitting the audience with unclean vocals throughout the record.

Well, there is some truth there. Pagan Metal being more of a vocation than a style, the band delivers a strange, folksy and Scandinavian-infused type of blackened Melodic Death Metal.

The real kicker is the artful inclusion of symphonic and orchestral parts into their tune. And no worries: This is not the Symphonic Metal madness that we often get served by many of the female-fronted Gothic Metal outfits. With those bands forgetting that they are not a friggin’ classical orchestra.

Panychida chose to use their symphonic parts mainly as breaks. Two examples: The intro The Wild Hunt Assembly at the very beginning and the instrumental In Striacium (meeting of the witches during sabbath).

This is not to say that none of the tracks use archaic or acoustic instruments, but it is carefully and skillfully done. At times the album sounds like some sort of a movie soundtrack – Perchtenlaufen be my witness. In other words, Haereticalia is not as weirdly funky as Antyra, but for sure not as solemn as stuff coming from Insomnium. Somewhere in between, but at a very refined stage.

And did I detect some hidden copycat?

Not directly, but for sure there are similarities. Some of these tunes get in part dangerously close to soundtracks already with us since the nineties. There are several, but Josafat (The Gathering) is really eerily similar to one of them Hollywood poppers that glorified arcane tribes in genocide meltdown back in time.

What about the delivery?

With a very short 9-track main contribution of some 36 minutes top, Haereticalia better be good. Luckily the band weaves this fabric very skillfully by mixing acoustics and the aforementioned classical elements with metal.

Then again monologues in clear voice with rasps. I like the rock solid, but somewhat subdued, guitar work on the album, mostly delivering riffing with solos virtually absent. The quality of production speaks by itself too: None of the elements get lost in translation, as is often the case these days. In addition, the tune keeps to the theme. Always straight to the point. This keeps things interesting, with some very good songwriting, conceptually up to par with the big ones in the genre.

I just cannot fathom why they would pollute the record with these remaining two live bonus tracks at the very end. Of course, this will get them more into the august realm of a real full-length album, but so what? I can only assume that Cursed Records cursed them with this poisoned gift – but then perhaps not. Because, believe me, if judging the record by all its moving parts, not only the base tracks, this rating would look much different.

A Bohemian Rhapsody of the metallic kind, then!

Panychida created in Haereticalia – The Night Battles a rock solid and – at the same time – innovative piece of work. Never veering off the theme – the Benandanti – the album gets you this impression of Machiavellian intrigues and unholy machinations that led to the demise of this movement in the end.

All this is presented with solid riffing, very good songwriting and an execution that stands up with the best. It is a short, but very complex album – sure – but worth every minute of your time. And you need to invest time to savor this disc. One listen will not be enough. Enjoy!


Editor’s Note: This record successfully made it onto the Intermittent Digest IV. Well done.