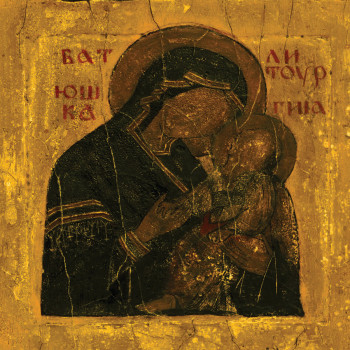 For sure not in Batushka‘s first studio record Litourgyia. This album is going to get worse as it progresses. And it has this friggin’ tendency to keep you on your toes, and not grant you one tranquil moment to calm down and contemplate your situation.

And I quote: “Band members are unknown, but they are from well-known bands.” We are told that the band is – supposedly – from Poland. And this fits and it does not bode well. There’s trouble looming over the horizon. Which is – of course – exactly what we want, when looking at such a record.

And indeed, the first sounds on this frozen debut concoction called Litourgyia are … chants. And once you think you are safe, then – wham – goes the metal, mainly of the Black and Doom kind.

This sounds like Caladan Brood and Darkend‘s ritualistic urges got thrown into a pot together with Myrkur, stirred well and created this mad child of theirs. Then they held black mass with some of their very best friends and out came – Litourgyia.

Litourgyia displays the same disconcerting characteristics than M from Myrkur. Meaning, it has a tendency to gripe. Employing an ever-changing dissonant streak and indulging in some cacophonous passages that will sweep you away.

All this delivers complete with clear voice passages, chants and all. Orthodox chants, not Gregorian. Then throw in some tight tremolo picking in some places, and mix well by spicing it up with some screams that would make Dani Filth proud.

The ever-present drum blasts are however never overbearing. Actually, the drum work is pretty well done. Varied and not overly complex, much to the contrary of the outrageous bullshit we have to suffer through sometimes. And to top it, a growly voice rasps away at different speeds, complete with screams, as a good Black Metal record must.

Once the monks have taken the robes off and started dancing on the tables, that is. The devil in exquisite discourse with the forces of light, if there are any. The whole record exudes that blasphemous vapor that I find frankly amazing. Real heretical stuff; but then this is exactly what Black Metal is all about. And I am not talking about the spike fist legion that wanted to take the genre over for a while with burning crosses and naked bodies hanging across the stage.

Now, it is really difficult to find your favorite track on Litourgyia. The way Batushka married Black Metal with chants in clear voice and then again other elements are just mind-boggling. I would, however, recommend the first two and three last parts of the tracklist for the podium. Having said that, none of these tracks are bad.

The only real negative is the sometimes overbearing compression that is ever-present, rendering the poisonous rasps and other elements difficult to detect sometimes. Stuff lost in translation, knocking a star off the rating.

In truth, I thought that we had them more or less lined up, the best albums of the year for 2015. And now this 41-minute monster comes along! I guess the list in the making needs to be revisited. To me, Litourgyia is a contender for the top spot – we will see.

The album itself is a wilder and different brand than what Myrkur got us some months earlier. But again a weird mix of soft passages and scalding hot Black Metal.

The whole record vibrates with energy and the fight between good and evil. It is however real heavy fare, not something that you should consume together with your champagne breakfast on Sunday morning by the beach.

Batushka have created an epic battle of Black Metal giants on vinyl. Really well done, I am impressed.

And it got them onto the 2015 Top 10 Records and the Intermittent Digest – Tome III. Congrats!

And here’s to some drama. Because Batushka – in 2019 – has two incarnations, one delivered Hospodi and the other Panihida. Go figure.