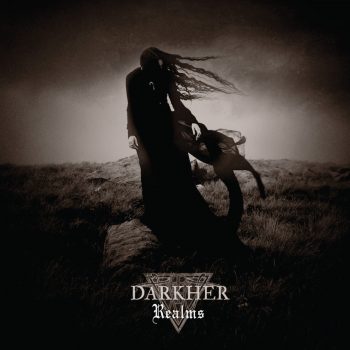 To be metal or not to be, ’tis the question. We are speaking about the début full-length album Realms of the (almost) one-woman show Darkher aka Jayn H. Wissenberg.

And it is – at first – a difficult proposition.

Just to find yourself later in a doomish soundscape that clearly smacks of metal, apart from the airy, atmospheric, almost folk-laden look and feel this album presents to you. I cannot but be reminded of Myrkur and their latest album M or the weary wails of Loreena McKennitt, both dwelling in the ethereal realm same as this one. Of course, the genres for the former and the latter are totally different. Realms features no screams or other kinds of growls, whilst Myrkur’s album definitely does.

Precision is the landmark on Realms!

You have got to admire the way the tracks are structured. Every instrument is thoughtfully placed, no note played on a whim. Wissenberg‘s vocal style perfectly adapts to the instrumentals, chiming in with the right timbre. And always with the right timing.

Where other bands overload the ears of the listener with a gazillion of instruments and sounds (because they can), Realms sports this almost minimalistic and purist approach when using instruments. The plain, but again very precise use of drums is very fitting to the overall soundscape. I found myself in a black room in shades of gray, looking out into a lightning riddled, stormy and desolate countryside.

The almost hypnotic nature of the tracks pulls you into something of a doom-laden daydream that is difficult to escape. That said, focusing on individual tracks gets cumbersome after a while. I would thus recommend listening to the album as a whole.

Now, why do I say this is doom?

The style already becomes manifest shortly after the start of the album, where you cruise along the dark riffs already visited by folks like Draconian or My Dying Bride. It is, however, difficult to pose the album in such a corner, as the tunes will surpass the somewhat simplistic style trap and take you beyond into yonder foggy moors.

Not all is totally groovy. For example, the intro Spirit Waker is – well – exactly a waste of space. It ain’t waking nuthin’. The record starts to improve with the second offering. Hollow Veil gets you into the groove of Doom, and this is actually the merit of this track.

The astonishing part of the album starts with Moths.

This is where the power and beauty of Realms really unfolds. It is one of the tracks that I cannot get enough of. Starting with crystal clear steel-string guitar, with Wissenberg‘s crisp lyrics, it displays a subtle progression that is capturing.

I also like the somewhat frugal war horns that display at the beginning of Wars. Then supplemented with a smattering of drums, just to follow through with ethereal singing. The latter two tracks are without doubt the filet-piece of the album.

The record then dips deep underwater – kind of a mid-point weakness – for a whopping three tracks. And this IS a pity, given that they only got 9 main tracks to choose from. Luckily, the album picks up some juice later with the two last tracks Foregone and Lament. And these two display some of the bite that we should have seen earlier, but didn’t. Specifically the former is noteworthy in this limited track list.

In my humble opinion, metal is the frame and doom is the game. It will get the badge too. The guitar is crisply played and has this metal tinge to it. Darkher created a piece of work with Realms that has this almost appalling ability to generate these dreary landscapes in your brain.

No fire in the hearth will make this impression go away, and you will still feel the cold. Only the end of the album can. This ability to create doom-laden soundscapes is one of her greatest strengths. Just look a the album cover with the blackened female in the midst of some dreary landscape.

After a while, however, I got somewhat upset with the record, though. Subtle separation of the tracks is not the strongest suit on Realms. Things have this tendency to psychedelically intermingle, creating more of the same all over again as we near the end of the album. This serves you with this doomish morass that is difficult to dissect and really enjoy.

Technically outstanding, clear, crisp, structurally sound and VERY doom, the album fails to deliver on that emotional, visceral level that cannot easily be explained. It leaves me cold, but not cold because of emotion (or a lack thereof). Cold, because it does not really connect, as others could.

Does this turn Realms into a bad album?

No, it is still good and indisputably a commendable effort. The talent is at the forefront, the excellent soundscapes are there. Great execution exists too. In other words, the good by far outweighs the bad and the ugly. That said, you will find a lot of potential still to grow and improve. And we want more of the same. Come in anytime. I’ll be watching.

And indeed, the album got itself an honorable mention on the 2016 Top 10 Records. Well done.