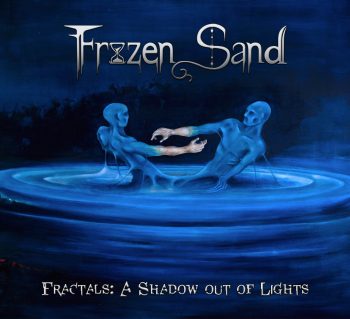 Fractals. An interesting subject. Something that can be divided into ever smaller shapes of the same. And fractals in a Progressive Rock piece are still more interesting. Does this mean we can sub-divide the music into same pieces as well? Probably not. Even if scientific studies were held to that subject.

But this is the title that Frozen Sand saddles us with in their newest full length Fractals: A Shadow out of Lights. The title and album are actually part of a storyline the band is developing called Fractals of Frozen Lifetimes. So, [author rolls eyes] here we go again with yet another theme laden record. Now, truth be told, many theme-based records do indeed deliver quality tunes to follow it up. So, the question is:

How will Fractals fare over all?

In the beginning I was not convinced about this offering of the Italian band Frozen Sand. Somehow the stubbornly lengthy acoustic intro already does not connect to the rest of the piece and vice versa. So, I entered the fray with mixed feelings and a foregone conclusion of what I will (might) find.

First, these guys poured all they had into this piece of rock.

And nothing less is expected from any band of quality. It gives you a sort of kick and gets your fingers into writing motion, when you feel the genuine emotion and passion that got into the making of a record. Also, their alternating of English, Spanish and Italian – whilst disconcerting to some – is well done. So, apart from the progressive rocky part, you’ll get a whiff of Eros Ramazzotti and Vasco Rossi combined.

If this is good or bad lies in the eyes of the beholder, of course.

Frozen Sand brand their style as Storytelling Prog Metal. Well, Fractals gets you a mix of Overtures, Steven Wilson and some Dream Theater-esque antics to go. A variety of styles, nuances and flavors that easily covers expectations from a Progressive Rock and Metal point of view.

Now, as always, not all is cool and groovy in the land of music making.

The album exudes a strange impression of hastily concocted tracks. A perception, a whiff of things astray, very difficult to pin down. It is as if not enough time was spent to let the tracks mature. This renders some of the songs somewhat rushed, kind of unfinished and frazzled around the edges, which is a pity. Something that is really apparent the longest, but also weakest track You – Partial – Perfection – Daylight.

So, what fractal pleasures will the track list bring you?

I almost died of boredom at the very beginning. Not that A Melody Through Time and Space is not technically savvy. If you want to do metal however, you need to get to the point. And I know that the label Progressive can hide a lot of sins, and indeed you can get away with many more. Lengthy intros however will not induce the cold, black metal hearts out there to any jumps of joy.

Redemption is however just around the corner with the second track Perfect Inspiration. This one takes off with some vengeance and is then followed by a varied pack of tracks that will rocket you towards metal bliss.

On top of Perfect Inspiration, you may want to let Everlasting Yearning and Rule this World borrow some of your hard-earned time. These ones rock in their own way.

Talking about variety: Some of them tracks – like in Sail towards the Unknown or in the forenamed You – Partial – Perfection – Daylight – dig deep into early progressive styles of the ’80s or early ’90s. Almost veering off into Jazz Rock territory at certain short moments.

The inclusion of all these elements makes for a complex, full-bodied painting rich in colors, which at times is almost overwhelmingly intense. Now, let me recommend the ballad-infused last track Silent Raven. I really liked that choice. It provides a fitting end to an intense record.

Frozen Sand add a refreshing piece of Progressive Rock and Metal to this more and more saturated genre. Fractals: A Shadow out of Lights elegantly avoids the djent trap that last year’s record from Haken fell in so famously.

Instead, they went for a lighter, story-telling mode that gorges with variety, interesting hooks, riffs and solos. In the end, the band created a piece of work that stands up to the big names currently populating the top 10 lists of many media outlets.

Is the album as a whole somewhat outside of the proverbial box? Damn straight it is. And this is one of its main qualities. Well done, guys.