Ah, yes! Sleepless music for the sleepless, made by the Sleepless Ones from Finland on their newest One for Sorrow. And where else would they come from? The land of eternal night it must be. A bit subdued, I would say but still trademark Insomnium fare.

Complex tunes established around the growls of Niilo Sevänen, just great Melodic Death Metal at its best. Like freshly ground coffee, to be enjoyed by preference in the morning as a little breakfast music. And you will find Melodic Death Metal with a Doom Death Metal component that is very pronounced. But that doesn’t really come as a surprise, now does it?

Their fifth full album One for Sorrow is unfortunately not as neatly produced as other records. And the growls, plus the clear voice parts by the way, sometimes almost get lost in the medley of different instruments serving to populate the tracks. This is a real pity, the whole record could have been much more impactful if mixed and mastered in a different fashion.

And the whole production is kind of difficult to stomach and digest. In the beginning, some of that sounds like Insomnium threw too many instruments into this metal mojito. Kind of mixed badly and spit out unevenly. But after a while (and some patience) it gets to you. Yet the whole impression needs to mature first.

Interestingly and perhaps connected to this, Insomnium‘s then guitarist Ville Vänni left the band after the album was produced in 2011 and was replaced by Markus Vanhala formerly from Omnium Gatherum. The latter – by the way – only really came to fame in the band’s newest 2014 stellar record Shadows of the Dying Sun. 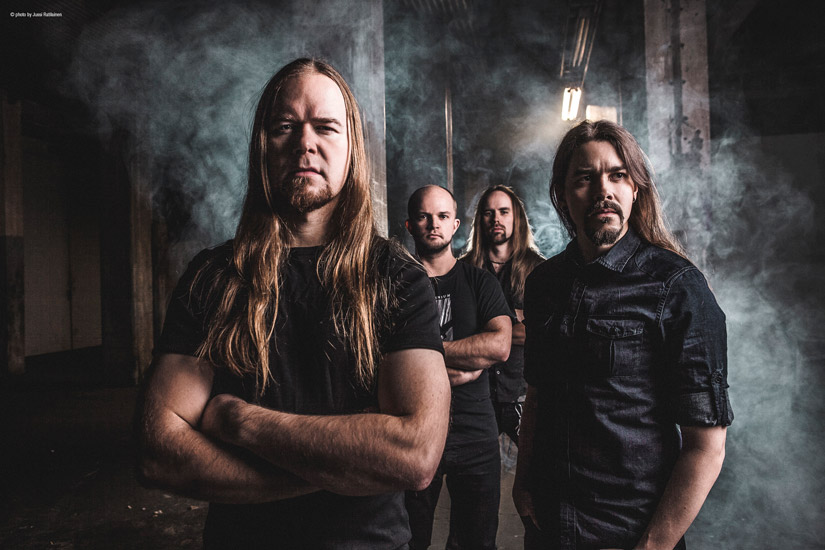 I do love the mix between clear voice passages and growls alternating themselves on One for Sorrow. Sometimes they deliciously coexist. Fabulously and positively adding to the humors and vapors this album exudes. This just puts enough spice into the tune to get everything to a more interesting level. But never lets us forget where the money is really made in this band.

And I disagree with the worriers and purists. The former argue that we will all of a sudden have a clear voice band of mediocre quality. The latter lament that we should only hack songs to pieces and growl over them like rabid dogs.

Give me a break. Yet, kind of to their point, the music sometimes sounds way too happy for the texts that are being used. Somewhat of a disconnect, if you consider the gloomy nature of the texts that the band employ.

And for once the intro – Inertia – is very good (not the waste of space other bands sometimes produce). It is kind of a zen, spacey sounding track, leading directly into Through the Shadows, followed by Song of the Blackest Bird – probably the best track of the album. All of those are real good; Melodic Death Metal of the Doom kind. Just great stuff.

Some of the tracks are just plain surprising. For example, Decoherence offers some symphonic elements and laid-back guitar elements. Turns out to be an instrumental of no Metal kind. But I still like it. This soothes the ears after so much Melodeath. Or does it?

Then there are parts in the album like Only One who Wants or Every Hour Wounds that would fit the cliché of pure Melodic Death Metal a bit better, more aggressive, and less innovative. And surprisingly, with growls better delivered. But forsooth I like the typical Insomnium style parts better, but then this might just be me.

The cherry on the pie is the last track One for Sorrow, slow, laid-back, but still forceful. Perhaps a tad too much Doom Metal, but it is a fitting end to a very good record in itself.

In the end, the One for Sorrow delivers rock-solid Insomnium fare. The band uses a time-tested pattern of intro, build-up, and epic final track again. And it works for them. They finally broke tradition in their 2016 Winter’s Gate. But this is the subject of another review.

Ed’s note: The review made it onto the first ever Intermittent Best Of. Congrats!