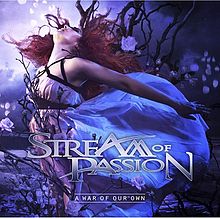 This is the thing with Evanescence sound-alikes. Often imitated, never matched, not quite getting there.

That kind of thing, right?

Well, the style of the Dutch band Stream of Passion for sure creates a déjà-vu of sounds past. But just calling their music this or that is somewhat simplistic.

Their newest 2014 production A War of Our Own comes across like a typical Symphonic Metal band with a strong Progressive Metal influence. A sound almost ubiquitous to anything in the genre. At first you hear some Evanescence in their tune. Later other names come to mind. Like Diabulus in Musica, Within Temptation, Illuminata – you name it. A mixed bag.

And it appears that the band fronted by Marcela Bovio embraced many different elements of the genre. This to create something varied, and for sure quite their own mix of remedies to avoid despair.

This new, more self-owned style came to life after their departure from Napalm Records. They insist that the cooperation with the latter – surprisingly to me – did not work out for them. They instead went out to crowd funding. And raised close to 45’000 EUR on their own to get this record produced.

The first four tracks – Monster, A War of our Own (the title song), The Curse and Autophobia are rocky, varied  and surprising. Actually, all of those display a new hard edge that was not there before.

But then, when you get excited and really start to concentrate, the album loses steam big time.

I would not call it a bad ending, but Stream of Passion lost themselves in a mix of progressive elements. In other words, the momentum they built in the beginning evaporates. And this just started to sound really good. Quo vadis A War of Our Own? That kind of thing.

This is also the time when the bricks start building that wall around the tracks. On some tracks like Burning Star the rampant compression almost gets the better of the track.

Yet again, this is not all bad, mind you. For example Delirio is an excellent track in its own right. Once you get past the terrible beginning, that is. Exile is noteworthy, too. And I like their alternating from English to Spanish and back. Very well done, this keeps the interest up and running.

To wrap this up, A War of Our Own is by all means an interesting piece of work. Yet for sure not all of the potential of this band is out in the open. Stream of Passion need to work on a more solid style of their own. For the moment many good things loose themselves in too much detail, wanting to be a few styles too many at the same time. And – sadly – the previous records The Flame Within and for sure Embrace the Storm outpace this latest album.

Yet in the end it gets kind of addictive to listen to this album. So, I will stay tuned for more. Yet data snippets seem to indicate that this may have been their last record.

But we will see, you never know. Right?