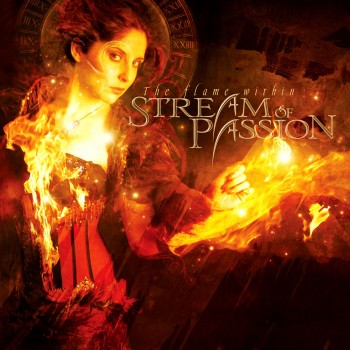 Here is a band that improves with the past? Or should we say they decline as they move forward into the future?

Well, first I reviewed Stream of Passion‘s newest album A War of Our Own – newest meaning 2014 – and not being impressed too much. So, I turned in desperation to some older stuff they produced.

The band’s second studio album The Flame Within really delivers a much better brand of Dutch Metal than I would have expected judging by their newest production.

The band recovered nicely, after having been treated somewhat shabbily by Arjen Lucassen, who left his project to Marcela Bovio and departed for shores unknown with two more original members. The lore and his website say that the departure was intended, but little mice are whispering that this is not quite exact.

But then there is nothing to substantiate that to a credible degree, so let’s treat it as a rumor – for now. But just check out the lyrics of The Leader. Well, whatever it was, the band went ahead and produced The Flame Within, a really nice and juicy chunk of Symphonic Metal or Gothic Metal, depending which way you want to turn it.

The style of The Flame Within is kind of a Delain-ish Evanescence tune of a more lively kind. And they really put the pedal to the metal on this one, whereas they could have moved out of the mighty shadows of the Gothic Metal mainstream a little better.

Not that The Flame Within is awfully fast – mid-tempo for most tracks – but it is really well produced with a lot of attention to detail. The band kept the bombast to a very low level, which is VERY good. At least here we have a band that does not think they are a friggin’ opera or something, like some do in this genre.

And true to the band’s name, The Flame Within gorges with passionate songs and lyrics. Actually, the lyrics are so laden with emotion it almost hurts at times. Either it is a Mexican thing, or there has been a lot of pain in the making of this album.

On the downside, The Flame Within loses steam in the second half.

Albeit, not as much as its 2014 successor. And some of that later stuff they present sounds kind of repetitive. My evil twin whispers that there is a strategy behind all this: Get the good tracks out first and let the others trail. People will buy the record before they heard it all.

Also, the cymbal-heavy and somewhat overwrought drum work grows heavy on ye after a while. And, they sail mighty close to the edge of darkness in the compression department. At least we do not lose a lot of elements due to that.

But, whilst this record may lose some oomph towards the end and suffer from mastering complexities, The Flame Within still sports a decent quality overall.

The Art of Loss gets going with the overall and passionate scheme. Fast-tracked, changes of tempi at every corner, heavily downturned guitars, dark and foreboding. It is Gothic Metal after all. Unfortunately, this is followed by more sanitized concoctions called In the End and Now or Never. And with these two they almost end up on other bands’ territory.

Boring, I thought, when starting on When You Hurt me the Most for the first time. And in the beginning, this sounds like the dime-a-dozen slows people like to call ballads. Because for some reason you need to have them in your album to appease the wrath of the unforgiving public.

Well, never farther from the truth: What sounded like a misaligned Evanescence faux-pas at first, morphed into the most amazing power ballads that I have ever heard. Led by Marcela’s powerful voice (and lyrics), it actually draws on the talents of all members of the band, getting to mid-tempo again, never losing the sense of the theme. A more traditional ballad called Run Away follows this one, also at very high levels of execution.

From then on the tracks kind of run into one another, losing steam somewhat as I said before. Noteworthy tracks are The Leader, Burn my Pain and Let me In. And don’t get me wrong: All that tune is pretty decent. But – alas – we suddenly find ourselves on cookie-cutter road, far too strongly for my taste.

And for once the remake of an existing track – Street Spirit, originally from Radiohead – is really well done. And I am usually not a big fan of them covers, so this one is special. Actually Stream of Passion managed to spice this up some more into a power song. Not sure why some Radiohead fans insist the original is better. I like this version – be gone, you purists.

The Flame Within is a real nice surprise, a pleasure to listen to. You do however need to be pretty brave to turn an attentive ear to this decidedly heavy menu of Symphonic Metal for some 55 minutes or so.