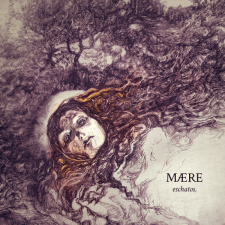 A few weeks ago RockmusicRaider covered Parodos, a New Age Black Metal outfit from Italy. Their unusual offering to the Dark Lord was already way off the beaten path as Black Metal goes. This is pretty good, they said. And it might not get much better, they said. Yet, they were wrong, so wrong.

Because for today’s dose of daily metal, I will propose a juicy mix between the earlier concoctions of Myrkur and a mad-scientist version of the German Todtgelichter.

The Latvian outfit Eschatos and their newest EP Maere will fit that description. And indeed they boast a style much more experimental than their Italian brethren ever demonstrated so far. The band’s approach is not only Post or New Age Black Metal. They throw all sorts of flavors into their toxic potion. From Folk Metal to Pagan, Industrial over Death to Atmospheric Metal. This decidedly short blurb sports some disturbingly tight ice-cold metal. Of an exquisite intensity that few know how to create.

But first and foremost, the EP conveys an atmosphere of desolation and despair. Exactly the way a good Maere is supposed to act riding your chest at night. So, if you are into Extreme Metal, I guarantee that this spicy jambalaya of soundbites will make you go for more.

The Riga-based band Eschatos saw the light of day in 2012. Firmly ensconced in the underground, they are chiefly known for their remarkable live performances.

On top they already bagged two full length albums with The Grand Noir being the most notable one. Maere is the follow-on blurb on for – I guess – bigger things still to come.