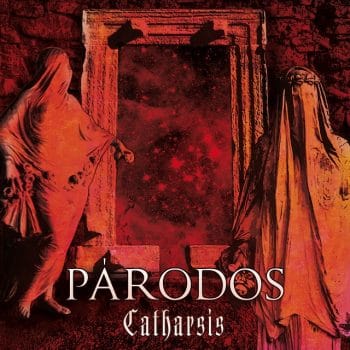 The RMR offices just reviewed the icy Black Metal album Kwintessens of Dodecahedron dealing with some sort of a rebirth cycle. Understandably, birth, death, rebirth are – for some at least – pretty important. Even if this specific dogma is not really supported by the Holy See.

So it is doubly spicy to see another such record appearing from Salerno in Italy of all places. A country more known for its catholic values, rather than its progressive undercurrents. With an offering of some Black Metal to boot. And that genre infested by The Goat is usually not too visible in this country. Even if a pretty active community exists alright, make no mistake.

You would expect some sort of traditional blackened concoction like the recent Narbeleth or Zeit. But Párodos‘ debut full length Catharsis gets you a totally different brand of Black Metal. None of the down-in-the-dungeon Black Metal style of rasping, riffing and drumming presents itself. No spattering of blood, girls on crosses and gory rituals neither.

To the contrary, you will get the Gothic darkness of Moonspell and the turbulent landscapes of Todtgelichter. Mix this with the freshness of the youngsters of Frozen Sand and combine with some of the unhinged unease Myrkur likes to project.  And perhaps – just perhaps – a hint of Katatonia and Alcest.

So in essence, this record refuses to bow to conventions. And that is a good thing. As if there were any, right? Conventions, I mean.

What really drew me is this taste of Avant-Garde, this notion of going Progressive, whilst still keeping (somehow) with their Black Metal roots. Call it Post Black Metal, if you will. Or New Age Black Metal – whatever takes your fancy. But know that the willingness and ability of the band to seek new ways really sets them apart from their brethren.

To spice things up further, did I detect some Fleshgod Apocalypse in there too? Indeed it looks like Párodos got themselves some help from Francesco Perrini, the latter’s keyboard artist.

Plus we find more old hands from the RMR review list, like Elisabetta Marchetti from Riti Occulti present as well. Albeit for a pretty short interlude.

All of that embedded into a whole bunch of different guest contributors. That many of the aforementioned bands are located in Italy only attests to the rising quality of the Italian metal community.

And I detect emotion, lots of emotion. The same type that we found when covering On the Eve of a Goodbye from The Reticent. Eve talked about a suicide that was impossible to prevent. And the emotional part was hellishly intense.

Catharsis navigates the thorny issues of disease, human suffering, the inevitable demise and what comes next. The album dedicates to a friend of the band who passed away recently. And this projects their sound out into the raw and makes the music vibrate with authenticity.

The record starts quietly, with a few keystrokes. Painting vivid pictures of castle halls with a roaring fire, when the wind howls outside. Then – suddenly – someone sounding like Cesare Borgia speaks to you about the fire and the meaning of life or something. And for once the intro really talks to the audience in terms of the theme and is not added as an afterthought as is often the case in a few select metal genres.

Yet, the wait is short and you’ll get your first fill of tremolo picking and blast beats in Space Omega. One of the best tracks on the album. And it perfectly catches the essence of the album with a juicy mix of clear voice Progressive and pretty sturdy Black Metal. Catharsis – the title song – will drive this point home further.

Just to focus on the Progressive Metal territory some more with the excellent Heart of Darkness. The album continues to produce good and sturdy tracks until they run out of steam, Metamorphosis be the witness.

In essence, Párodos expertly master the link between the acoustics and the metal parts. This seamless switch from progressively-laden acoustics, keys or symphonics to abundant Black Metal sounds really is one of the main pillars of Catharsis. And it is expertly done, too.

For that we will forgive them the sparse supply of solos on the record. Albeit, the riffing is generally outstanding and lends itself perfectly to the theme. Theirs is also a record of lengthy tracks without losing themselves in swampy endless strings of meaningless sounds.

The complex song structures integrate abundant, clear voice passages with pretty sturdy very proficient growls. You need to compare this to the Gothic Metal universe. Where for some reason some old diehards cannot cease injecting these abject grunts.

Párodos rightly and expertly uses them to emphasize atmosphere and emotion. And this is where they belong. Whereas – in other records – often unclean vocals get thrown in as an afterthought. Because the Code of Metal sez that you must have them to be cool.

Only the mature bands use these tools of the trade to drive home their message and by doing so defy conventions. Catharsis attest of that very specific savoir-faire. This is especially refreshing in metal, where anybody and sundry wants to give their tune an own metal sub-genre description. And at the same time want to adhere to the (non-existent) conventions. A contradiction in terms, if there ever was any.

And what about the spike-fisted, hard-core Black Metal adepts?

Well – yeah – Catharsis might not be a record to blast beat you into submission. But the Black Metal parts are expertly done and corny enough to smear at least some soothing metal balm on your mutual blackened souls.

In the end, it is as I always say. If you write an album with a concept and storyline, the outcome risks to be good. Párodos wrote an astonishing and highly complex record. A piece of work that is still smooth enough like a dram of whiskey from the highlands. Yet at the same time spicy, edgy and rough. You think that this is not possible? Think again.

Editor’s note: The record successfully made it onto the Intermittent Digest – Tome VI edition. Congrats.