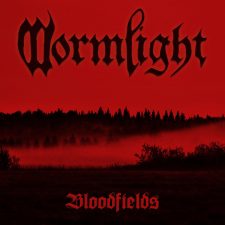 Do you feel anger today? And I don’t mean some weak frustration. I mean white-hot, seething anger?

Then what better thing than to find a lava-drenched chunk of Melodic Black Metal to soothe it. Fight fire with fire in a sense, the kind of anger management every metal head can buy into wholeheartedly, right? And I found just the right medication in the 2016 re-release of Bloodfields, the 2nd EP of the Swedish Black Metal outfit Wormlight.

And why on earth are we featuring a re-release from last year?

Well, first this is great, crunchy Black Metal with just the right hint at melody to keep it interesting. A short, but action-packed offering of dark riffs, soaring solos and screamy vocals that for sure will awake your head-banging urges.

Second, the short, but somewhat turbulent history of the band’s making since 2014 stamped a noteworthy influence on their tune. The band started out being called Unhallow, which then issued a first EP An Ancient Enemy in 2015. As is often the case with many new bands, important line-up changes happened with Tiamat Invictuz finally appearing at the helm. At that same time, the band changed their identity to Wormlight.

Interestingly, the growls change from mainly screamed to a darker, kind of Death Metal induced type of holler. At the same time the sound also got darker and meatier. Or is it just me? Great stuff, anyway!

Now, I am hearing that the band intends to release a full length in 2017. Well, let’s have it!

In the meantime, taste this:

The RockmusicRaider YouTube Channel features this video and many others for your listening pleasure. Why not give it a listen and hit subscribe.