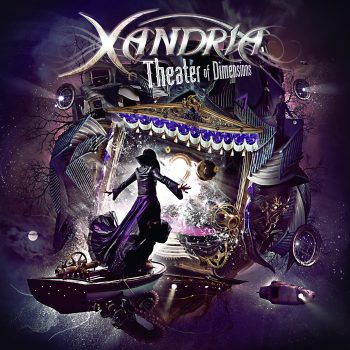 They did it. They finally dit it. Xandria managed to keep one of their female fronts a bit longer than for a felt stretch of one album only. So, here they again feature the classically trained Dutch singer Dianne Van Giersbergen on their second album in a row. And rightly so. Talented girl that she is, she can easily match a range from Tarja Turunen, over Floor Jansen and back to Simone Simons. And that means something.

As the band’s progression goes, already their last contribution Sacrificium was a step up the star-studded ladder of operatic glory. This makes you wonder where their latest and seventh full length record Theater of Dimensions will take us.

Xandria has come a long way since the more ethereal and orientally influenced masterpieces like Ravenheart. Or even India to a lesser extent. With the questionable Neverworld’s End, the band started its inexorable march towards the symphonic universe and the cheese-laden pleasures of epic Power Metal. And true to the credo that Power Metal must have a story (any story), Theater of Dimensions centers around a theme.

Big yawn, right? Yet another band with a ubiquitous theme album?

Not quite that way, this time around. As it happens, themes and storylines often provide solid drive and purpose to albums. So, whilst this theme thing has indeed been overused by many, the way to construct a record more often than not benefits the quality of the album. And in Xandria‘s case the story is pretty sturdy, acting as a fil-rouge through the record and down them tracks.

Now, where Gloryhammer invaded the universe, Theater of Dimensions talks about the escapist urges of a girl building a time machine. And it is the evil, dictatorial overlord from another dimension that she wants to vanquish. Only halfway through her machinations, she has to make some difficult choices, leading to some bittersweet victory of sorts.

To take corny issues from the scientific or science-fiction universes and build them into a record theme is indeed nothing new. Epica for example do this pretty much for every album they release. Even Nightwish could not resist last time they issued a record.

Xandria‘s theme slides down this very slippery pseudo-scientific / fantasy slope, same as quite a few in the genre have done before. There is always danger that the record descends into the silly cheese-laden rabbit hole of no return. The record definitely did not go that route, even if A Theater of Dimensions (the title track) veers dangerously close to this particular black hole. But in the end, it avoids this dangerous cliff and neatly navigates around it.

For some reason, the Symphonic Metal scene seems to be convinced that good sound must be compressed and the loudness tuned up. Then you will need a choir that kind of sounds like a refreshed version of the one used in The Omen. To top it, there is the imitation game going on and a tendency to stuff whatever element you can find into your tune.

Theater of Dimensions is no different in this sense. Some of that stuff sounds indeed like Nightwish mixed with Epica warmed up. On top the record boasts this garden-variety drum work that is disturbing in its blandness and knocks some of the luster off the tune after a while.

But enough of this negativity.

First, the mixing and mastering jobs are pretty well done with no considerable elements lost. Even if not all is always discernible correctly at all times. Then, Xandria differentiate by slamming a record on the market that has the oomph and drive Avantasia should have displayed for their latest record. When there still was time, that is. That Xandria avoided the infamous cheese trap is another strong point of the album. Now, I am not saying there is none. But if you compare the cheese platters other bands try to serve us with, this record is pretty acceptable. Besides, some cheese goes with the territory in this type of soundscape.

The aforementioned differentiation does not stop at oomph only. Xandria tuned the tracks to fit the action. To illustrate, whilst We are Murderers (We all) is reasonably brutal and dark, Dark Night of the Soul is of a different timbre altogether. To pull that much variety off so well, the band is lucky to have a can-do vocalist like Dianne. But it is not only Dianne, you will find a felt gazillion of guest singers and contributors on this album.

If you put the offering in context with the storyline, things look even more lively. The first half kind of fetches its influences in the Gothic and – chiefly – the symphonic universe. Later the tracks turn mostly cinematic, which I like. You really get the feel of the story, a hint of some sort of a rock opera. And all that while racing down that Power Metal highway of theirs.

In the end, Theater of Dimensions has a story to tell. And Xandria tells it well with a lot of variety and musical acumen. Decidedly based in Symphonic and Power Metal, the album impresses with sturdy, brutal riffs and solos. Then again, commingling thoughtfully arranged, yet complex melodies sometimes of cinematic proportions. To savor this tasty mouthful of hot metal stew, it is best to settle down in a quiet corner and give the story your time of day. It is only then that the record will reveal its real qualities.

As an afterthought: If you need to cool down after all this bombast and you happen to listen to the De Luxe edition, just savor the unplugged version of Dark Night of the Soul. It will be worth your time.