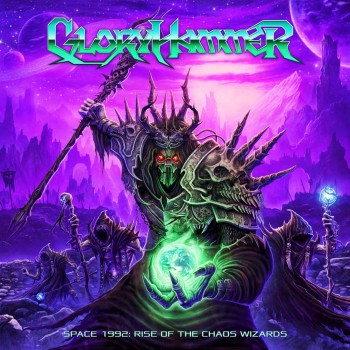 Never judge anything by its looks! I tell ya. Don’t. The garish album art of the newest Gloryhammer album Space 1992: Rise of the Chaos Wizards with its purple pinkish hue and green Lego monster just got my teeth hurting in a heartbeat.

And it is a good example of why not.

Gloryhammer present you with insanely catchy lines, melodies that will stick to you like honey in your hair, presenting their parodical metal cheese with an enthusiasm and energy that will wither away the mighty egos of other bands to nothing. By Loki!

In short, Space 1992: Rise of the Chaos Wizards will just worm itself into your brain and take hold. And at the same time blow these other folks out into space, facing the forces from Scotland marching (or more zapping about the stars) to save the galaxy, nothing less.

But who would have expected epic Power Metal of the Symphonic kind (or vice versa…) in this (way too) colorful robe of theirs. The tune they present is like having Kamelot gone the silly way. Plus, Nightwish times two, married to Epica on steroids – without the female fronts. And I would like these two get the energy the folks from Gloryhammer display. Especially Epica’s The Quantum Enigma did not deliver, so I wonder if these folks will get there one day.

And talking about fronts.

Whilst presented on a mighty cheese platter, you just gotta love the lyrics offerings in pure Scottish and – hold on to your seat – some Swiss accent too. Perfectly delivered, though. And in truth both countries are known for cheese, lots of cheese. I reckon this is about even: 50% Gruyère and 50% Isle of Mull Cheddar.

Now, the cheese is something you need to take when listening to this kind of metal. In the end authenticity, passion and delivering songs like a fucking war cry will win the battle. And Gloryhammer just won the 100 brownie points on sale for this genre. Not convinced? Just check out their video below. This is so silly, it’s actually perfect.

And you know what?

Space 1992: Rise of the Chaos Wizards does not even get a hint of a rock ballad to us like the one in their last album. Nope. This is Power Metal and ballads are for wusses. Right? Well, not wrong. If they can muster that much enthusiasm to produce so much cheese that we drown in fondue, they could at least add a little sugar to it to produce some slows. But no, it ain’t gonna be. Now, back to what actually is there.

Space 1992: Rise of the Chaos Wizards rides into space in style!

With an intro, a spoken intro, the war has seemingly returned to the galaxy. Well, whom am I kidding? Take that! You need to get this spaceship flying before you can get into space to fight elves, unicorns and space goblins on drugs. And then it comes: Sanctus Dominus Infernus Ad Astra! Well, well! This starts off really heavy.

Rise of the Chaos Wizards (the title song) adds on nicely to the intro, only I am never sure if this is Nightwish going strong or somebody else. Until the frontman comes in, that is. This track packs kind of a tacky delivery (okay, you need to go back and look at the lego monster to understand) and a nice chorus, but is totally overloaded with drum blasts paving this galactic path of theirs, I am sorry to say. This provides this endless, rumbling background noise that really does not add value to any of the songs on this mighty dish of space dust. This is, by the way, one of the main negatives in this record and it is not getting better in Legend of the Astral Hammer.

Now we will finally find a decent solo in Goblin King of the Darkstorm Galaxy, a really nice one too. There are others of course, but not enough for my taste and not delivered in any degree of aggression usually prevalent in metal. However, this being a record of contrasts, there are insane licks at times and some decent shredding in some of the tunes.

Another noteworthy song is Heroes (of Dundee). Not because it is so very outstanding, but because its insanely catchy chorus will follow you around and pop up at the most inconvenient moments. Then coming last, we get treated to a space opera in Apocalypse 1992. This one perfectly fits the theme, spoken lyrics and all.

A refreshing track, a tad more complex than the others that suffered somewhat from a bland and repetitive song structure. If you like being confronted with the cosmic rage of astral dwarves from Aberdeen, that is. And saving weeping unicorns or something. Let’s just not get to the rest of the lyrics on this track. Just not. And – by the way – I never knew the mighty powers of the galaxy were located in Scotland. Loki save my sanity, please.

A couple of reasons: First, Thomas Winkler aka ‘Voice-Modulated Star Nucleus’ pulls this ship forward with astonishing vocal powers. Together with the ‘Positronic Oscillator Command’ – ahem, sorry – Christopher Bowes (Alestorm), they form a dream team that keeps the galactic counter-attack going at warp speed. In fact, the whole production of Space 1992 is 100% in line with their concept and story-line.

Then, it is because you just cannot beat the enthusiasm and the majestically overdone epic Space Metal. And all this gallivanting across galaxies in search for battle with a Scottish flavor to it is just irresistible.

Just having the courage to be magnanimously chanting about Questlords of Inverness looking for battle on Mars already earns them the winning ticket to visit the cookie-monster in Aldebaran. These guys take the word swagger to the next stage by simply taking off into space setting the Universe On Fire. With an Amaranthe-esque Pop Metal song, no less.

Other bands would already have been keelhauled and the remains fed to the sharks. Or marooned on an island. But these guys? In front of so much mighty cheese, epic blasting around the galaxy from Dundee and equally epic egos, I will give in and meekly join the fanboy crowd. And don’t get me wrong, this is very, very good shit, no doubt about it. Gloryhammer let the space legions roll in and the mighty steel dragons fly to save the galaxy.

What else could I ask for?

Perhaps in a distant future, Gloryhammer should provide the soundtrack for the next Star Wars. R2-D2 might not survive that one, though. The mighty Hammer of Glory would just do him. For sure. Now I am gonna unpack my virtual reality drive, blast off some Gloryhammer in my headphones and go hunting for The Force in space.

Ed’s note: Meantime, check out the 10 Most Popular Posts @ RockmusicRaider, edition I and II. The album features on it, but at what rank? And congrats, this record also successfully made it onto the Intermittent Digest – Tome III. Plus, there’s a sequel released in 2019. Enjoy!