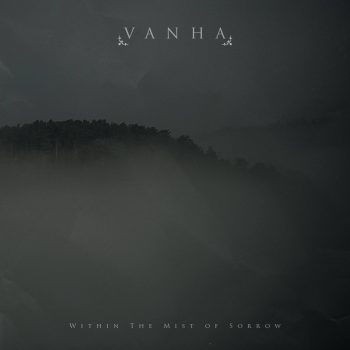 2016 was a pretty good year for all things doom, methinks. RockmusicRaider just released a review on the US band Khemmis and their kind of progressive and melodious doomish self.

The fearless RMR scout team just unearthed a tasty morsel of a similar ilk from very late in 2016. But mostly delivered in best, growly Doom Death Metal fashion – with clear vocals and croaks expertly mixed. And the team here thought that the slowly chugging beat of My Dying Bride could not be bested.

But the Swedish act Vanha with their début Within the Mist of Sorrow are a sure contender to do just that.

Vanha contributes just that decisive additional quantum of technical prowess and lemon-scented sadness to their weeping piece of work that Paradise Lost never chose to enact in their latest. They take emotion and desperation to a whole new level. It is only The Reticent and their offering in 2016 who beat them to the punch lately. Of course, the latter is more hunting the holy prog grounds. But it does not necessarily partake in the Doom Metal crowd.

Now back to Vanha: How to describe this raging torrent of sadness hurtling towards us? Well, it is really this mix of a goodly measure of Paradise Lost together with two large shots of Draconian Sovran-esqe sad-drops in it.

Now, I admit: Same as some others in the reviewers’ community, I first thought that Vanha was a fully stocked band. What a surprise to find out that Vanha are two guys only of the multi-instrumentalist kind. Meet Jan Johansson on vocals, guitars and keyboards and Jesse Oinas on drums. That the band only saw the day of light mid 2016 and produced such a refined and angst dripping bit of doom a few short months later is pretty damn cool.

Now, we called a lot of names earlier in this review and this is only just.

Vanha place themselves slam into the middle of the doom metal movement, sturdy, but predictable in a way. But there is more to it: Whilst many other bands try to use mighty guitars riffs to drive their tune forward, as per the expected norm, this is not so with Vanha. In truth, Within the Mist of Sorrow dances to a different tune. Astonishingly, it is often the piano that pulls this black calèche with its dark horses along this agony spattered road of sorrows.

This serves as some sort of a fil-rouge starting right at the beginning.

The piano theme continues with more prominence in tracks like The Curse and Dark Heart. What some could classify as predominantly non-metal and cheesy turns out to be the fuel in this mighty machine of doom. Not to forget the thoughtful use of gongs and string sounds, between others.

Just look at the first track Old Hearts Fail: Setting the tone with a fitting piano intro, Within the Mist of Sorrow marches straight into the foggy realm of soggy, haunted moors and desolation. Just taste this part of the lyrics – and I quote “…There comes a time for us all, when light no longer exists…”. Now this just serves as the essence’s token for this record.

The second track Into The Cold Night really embeds this sentiment. Its meaty splendor really gets you to the next level of this doomish experience. And do check out the video below, will ya.

Within the Mist of Sorrow not only shines with piano interludes, sturdy riffing and some stellar solos sprinkled along the way. You will also get an atmospheric flavor in many parts of the album. As the track Reaching the End – for example – nicely showcases in this battle of sorrows. Same as the aforementioned Dark Heart, the former also boasts a sturdy solo in the midst of the tune.

Now, let me mention the second-before-last track Desolation. Laden with Nordic Melodeath-infused monologues, it provides this perfectly spaced dark and desperate ending to a great album. Before the record putters to a halt with an orchestral version of The Curse.

To conclude, Within the Mist of Sorrow is a juicy, tear-drenched nugget that just got washed up on the shores of that mighty Doom Metal river. Vanha know how to construct their tracks well. And the mixing and mastering job really reflects the overall very high quality of the record. The album impresses with effervescent, thoughtful, yet lively melodies that all of a sudden descend into a crescendo of riffs, solos and growls. This renders the album delicate, yet complex and full-blooded. An amazing feat for a debut and a pleasure to behold.