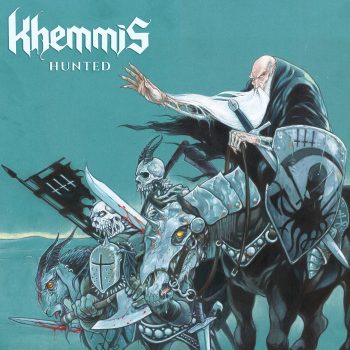 I think the likes of Paradise Lost or My Dying Bride just got themselves some serious company. But with a grungy flavor that constantly reminds me of the 2015 piece Crypt Sermon wrote.

Now, where is this terrible name-calling coming from already at the beginning of a review?

Well, the sophomore effort Hunted of the American band Khemmis does that to you. This is not to say that they are skimming off other bands too hard, just to be clear. They place themselves slam into this Doom Metal universe that other sad warriors already occupy for some time.

And Hunted differentiates how exactly?

First, to get there you need to give the record a serious listen. Or even two. And then, what is this bullshit expression of the goofy business types again? Ah, yeah: Flawless execution. This comes to mind when you delve into the pleasures Khemmis offers to you.

With no silly intro to haunt your doom metal crunch dreams, they riff away straight from the get-go. And impress with greatly engineered doom-ish riffs, peppered with solos and spiced with clean vocals or some strategically placed grunts and rasps. All that jazz always delivered with a trifle Iron Maiden added into the fray.

This is already the point in time, when the pretty solid flow inside the tracks from style to style becomes apparent. Khemmis string them songs together like they did this for the last twenty years or so. But no, ’tis a relatively young band.

They formed in 2012 and issued their first-born full length Absolution in 2015. Now, some short months after this first one, they hit us already with Hunted. And this for that dreaded shipwreck waiting to happen for many bands on their second round.

Whilst the album seems overly loud for some pockets, pitching some elements over board over time, there is nothing wrong with the mixing and mastering of the album. So, this pretty flawless production (there, I said it again…) is usually the hallmark of bands already up there on the Olympus of doom-power. But this band just started their climb.

You’ll find five tracks on Hunted! Only five. Only?

And none of those are shorter than 6 1/2 minutes top. Usually this kind of cock-sure swagger you only find in bands that are very convinced of their capabilities. Or in those that were so drugged out back in time that they got us these rambling epic bullshit dumps with no rhyme or reason. So, when I hit go on my vinyl monster player, I expected many things, but not this.

‘Cause Above the Water starts with this riff going solo that just follows you around. The stoner-esque flavor of some parts hit you in the stomach like a glass of Southern Comfort tossed neat once too many times. It is this groove and atmosphere that just pulls you down into yonder gloomy landscape.

Now, once you think this can get no better, the album hits you with Candlelight. To me this is the peak of this deeply etched doom platter. Super-cool Doom Rock turned Metal that hits you like a ton of tear-drowned granite. What I really like is their ability to switch from clear vocals to raspy, kind of breathless growls and back again without batting an eyelid. And at the same time down-turning and juicing up their tune some more to fit the theme. Just stellar how they do that.

Now, Hunted can also do faster doom, as is demonstrated in Three Gates. Here the growls get on display prominently for the first time. Growls are where many new and newer bands fail miserably after a clear vocal performance. And again, their performance and flow are spot on.

It is this ability to change tune, flavor and atmosphere at a moment’s notice and never lose quality that is their main strength. Now, never think for a moment that the pressure will let up. Because they kick it up a few strings in Hunted – the title song. A 13 1/2 minute epic piece of squealing, tear-laden melodies and crunchy riffs that provide a fitting end to a pretty cool album.

And I thought this would not end well.

Ushering in a new album after only so many months is often a recipe for disaster. Not so for this band: Khemmis demonstrated the right artistic chutzpah and drive to not only improve their tune, but also slam more refined material down our ears.

In the end Hunted is a well rounded album with a pretty good flow. The way the record meanders through this doom-laden soundscape, ever varying its sound from rough to dreamy to terrific sad-boy solos is just amazing. So – indeed – competition has just arrived for the mighty doom crunchers out there. And I am sure Khemmis will continue to harry them in their next record.

Now, as it happens the 2016 Top 10 have already been issued. If this would not be so, I’m sure Hunted would have found a space there, too. Cool material, I like it.

Go and get it