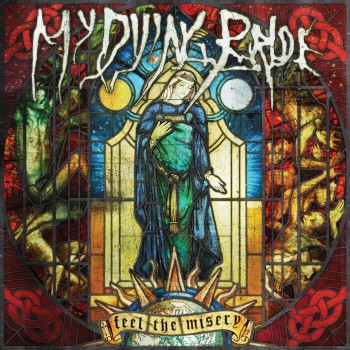 For those who think that The Plague Within of Paradise Lost has been the absolute best of our Year of the Lord 2015, think again. My Dying Bride just cut you loose, adrift in an ocean of pain, just Feel the Misery!

I know one should not give the boat away and show yer mighty colors too soon, but this mixture between Paradise Lost, Sorcerer and My Silent Wake is just irresistible. A gem we didn’t know yet was coming to us by this fall. What a great year 2015 has been for Doom Metal of all kinds. From newcomers like Crypt Sermon to old hands like My Dying Bride. All there, just stellar.

Such a performance is even more remarkable after an already distinguished career of some 25 years. My Dying Bride is considered by many as one of the ‘founding fathers’ of the Doom Metal movement. At that time, they were part of what is commonly called the ‘Peaceville Three’ – Paradise Lost, Anathema and My Dying Bride. A jumble of bands giving some form and direction to the genre, as the lore goes. At least the best known ones. And wow, just thinking back to the beginnings of My Dying Bride in the ’90s with records like Turn Lose the Swans (okay, it is the second album, I know..).

And this newest album this year is just a worthy continuation of things past.

Yet, you gotta be in the mood to Feel the Misery and – really – mentally stable. ‘Cause it IS Doom Metal as we know it. But as the days get longer and colder, this is kind of fitting to the overall mood.

Doomsters will be able to take it, but can you stomach this huge load of Doom as a normal metal fan?

The 12th studio album Feel The Misery is gorging with slow, heavy beating rhythms, riffs at every nook and cranny and the slow, drawn out lyrics that go with a Doom Metal production. I always thought Nick Holmes of Paradise Lost was the king supreme with the best gummy lyrics drawling skills, but Aaron Stainthorpe takes the cake on Feel The Misery.

The first track And My Father Left Forever goes off the poppy cliff in clear voice. This got me somewhat worried: 9+ minutes of Pop Metal from a Doom Metal band? A frightening thought.

But then – fortunately – some serious juice kicks in with a vengeance. To Shiver in Empty Halls firmly brings us back to Death Doom Metal heaven – remarkably good that one. Crispy crunch, slowly BBQ’ed over a blazing fire. Love that song – specifically that they spiced it up with a clear voice passage, some spoken. Smell of Black Metal with some stellar tremolo picking going on. Just speak about kicking it up a notch.

Now firmly in the groove, A Cold New Curse follows down that road, but this time with more generic Doom. At some point in this lengthy track you kind of wonder where this is going, and suddenly a doomish storm of metal kicks loose. With some symphonic elements in there, stellar that. And then Feel The Misery – the title song – gets going. Slowly, slowly beating you into the dust until you move no more.

Oh, I hear Da Mighty Bell again? First heard in 1970 with Black Sabbath, never equaled since. But here we have some skillful application of it in I Celebrate Your Skin. The whole track is reminiscent of the latter, but not the same. Nice piece, that one – slow and as Sabbath-ish as they come. Within a Sleeping Forest is very well done, but proves to be a stretch at some 11 minutes or so (okay, a few seconds less, I admit..). This one is a somewhat endless concoction with its endless doomish elements of the funeral kind. Sounds like Finsterforst on a slow day. But a fitting end to this record.

To wrap this up, Feel The Misery looks and feels complete, but – alas – we certainly found flaws. Depending on what equipment you use for your listening pleasure, Aaron’s voice comes across as somewhat tinny, kind of hiding in the background. Also the bass played by Lena Abé somehow fails to come out. And – last, but not least – at some point the enforced slowness starts to sound somewhat artificial – difficult to describe this one. All of the above is however relatively minor and not much to fuss about.

None of tracks present qualify as fillers, though. And this is a difficult feat with no song shorter than five minutes in length. There are weaker tracks like A Thorn of Wisdom, but otherwise things look pretty good.

My Dying Bride really pulled out all the stops on Feel The Misery. And out came a very varied and solid album – no more, no less. Going across different Doom styles, it will be a delight to Doomsters, but also any metal enthusiast alike. Even if it comes across as sometimes heavy at times. I like it, good job. Consume without moderation.

And congratulations. The album made it to the 2015 Top 10 Records. Very good.