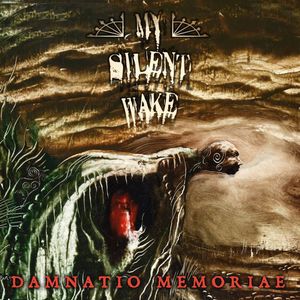 Doom Metal is one of the most fascinating genres in the metal multiverse. Ranging from clear voice and female fronted outfits, like Draconian, over the Peaceville Three to the slow marches of Funeral Doom.

And it is all about emotion. Some project tear-drenched sadness. And others again go for angry desolation, fueled by everyday issues and concerns.

And this is the emotional scale My Silent Wake project in their album Damnatio Memoriae. Doom Death Metal to be consumed with a pinch of desolation and powered by general anger, even fury. And they deliver it well.

Damnatio Memoriae literally means Damnation of Memory in Latin. This harkens back to Roman times, believe it or not. Back then the authorities practiced the eradication of a person or – more – the memory thereof. A fate usually reserved for traitors to the Roman Empire.

Speak about doom right there.

The record covers thorny topics like child abuse or the current violent state of the world. Very often directly connected to people wanting to shove their believes down our mutual throats – or else. Some of the material speaks to more personal issues related to the members of this band.

My Silent Wake sport a solemn Doom Death Metal style for this album. Stripped down to bare bones only with some Gothic Metal elements woven into it for sport. The whole style is so barren that it almost hurts at times.

You will find guitars, drums, some bass – nothing much else. A scratchy, screechy kind of metal that really dwells in the underground of the metal world. In a way, their delivery reminds me of a paled down mix of early day Paradise Lost, with a dose or two of My Dying Bride and a whiff of early Tiamat.

But then again, they amaze me by producing a few ambient pieces. Almost psychedelic passages that resemble stuff we heard back in the ’70s and early ’80s. But with distorted guitars and grunts to boot. Just fire up The Empty Unknown. Other tracks again feature some skeletal Insomnium type injections – very well done. So far, so good – and almost no clean singing.

Ian Arkley screams, rasps and rants away with raw emotion starting with Of Fury. All this binds into the somewhat simple song structures that are for sure not a strong suit of this album. However, the barren, frugal drums and the unadorned riffing, combined with the angry screams surely project a distinct despondency that is the essence of this album.

The second track High Wire and its follower Now It Destroys clearly confirm this tendency as you move down the track list. The latter track – by the way – serves us with a pretty sturdy solo too.

Damnatio Memoriae only really takes off towards the middle of the album. The roughly hewn dreaminess of The Empty Unknown of some 14 minutes will blow your mind. The track vacillates between some heavy doom, with passages seemingly clipped from Pink Floyd of the early ’80s.

Or take the pretty cool And So It Comes to an End: The track solemnly marches off into yonder mists with a grungy mix of Heavy and Doom Metal, lamenting midlife-crises between other things. Complete with a few very short solos, mind you. Now why the masters-that-be waited so long with the better tracks to kick in is beyond me. Why not just stick them to the front straight away?

That said, the album also comes across as a bit bloodless at times. Too many scratchy elements and the vocal parts are subdued in a way that they do not resound well with the listener. A meatier and heavier sound, look and feel would for sure benefit their overall acceptance and help expand their fan base.

The grunts are well administered and I like the aggressive levels of energy that emanate from the lyrics. Even if they sometimes kind of get lost in the overall tune. But that is a matter for the mixers and masterers of future albums still to come.

In conclusion, Damnatio Memoriae is good, solid Death Doom Metal with a strong melodic influence and a slightly Gothic flavor. The album is no weak barley water, but for sure no firebrand whisky neither. So in other words: A tad more flamboyance and juice would do them good to increase their oomph. In addition, you will need to listen to this record a few times to get into the groove.

Savoring My Silent Wake sometimes feels like crunching metal cubes with your teeth, rendering it all that kind of difficult to digest. In all, however, Damnatio Memoriae is a stout and hardy doom album that should have a place in your music collection.

If you are a doomster, go for it by all means – if not, give it a try anyway, you may be positively surprised. I will for sure continue to keep an eye on them for future works.

Editor’s note: The album re-issued in April 2017 with three bonus tracks – Of Fury, And So It Comes to an End and Now It Destroys – with added keys and dulcimer. The review covers the original tracks only.