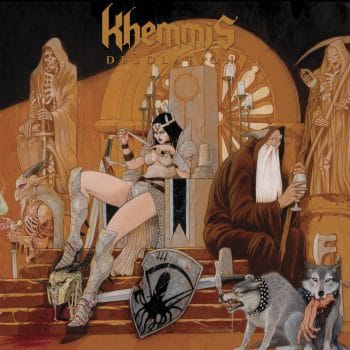 We just covered the latest of King Goat, another (not so) new kid on the block in the Doom Metal multiverse. This band, together with players like Pallbearer – or again – Crypt Sermon served as a somewhat of a new breed of doomers. And by that token, these folks took the metal fan crowd by storm. Quite deservedly so, when looking at the overall quality of their combined tunes. Peaceville Three and Draconians of this world be gone.

The list would of course not be complete without Khemmis from the US. These boys were on a rapid-fire run down doom road until now. On a high of creativity, they got us Hunted in 2016 via 20 Buck Spin, just one short year after their début Absolution. A few raised eyebrows apart, Hunted indeed reached an amazing 8/10 on the RockmusicRaider rating scale of dread. Thus they got around this terrible sophomore cliff without too much effort. Sometimes waves of creativity are like tsunamis that wash these bands onto the shores of glory with none of the usual terrors.

Now, after just two short years, their new album Desolation appears on our doorsteps. After two pretty stellar contributions, expectations are undoubtedly sky-high. And this is why the RockmusicRaider deck crew treaded lightly around this trap, not to kill a band that somehow would – for some reason – fail to produce yet another album filled with new shiny things.

First off, Bloodletting takes off like a Khemmis record must. Perhaps not at the thunderclap level of meatiness that Hunted managed for its first track. But this is their undisputed mix of Doom Metal and crunchy Heavy Metal without the wail. Yet, already in this first track a new penchant towards Heavy Metal becomes very visible. The Iron Maiden-ish galloping structure of Isolation only confirms this finding.

Yet, Khemmis do keep to their very own style, shaping their metal more into a mid-tempo mold than the sometimes super-rapid and high pitched offerings of traditional Heavy Metal bands. On top, they pretty much kept to lengthy tracks on hyper short track lists. Which in itself bears risks, but on the other side confirms a healthy level of self-confidence.

Right from the beginning, the extended vocal prowess of Phil Pendergast jumps to the forefront. Compared to the last two records, intonation and use of vocal power are at a totally different level. Now we have real emotion and an ability to shift the chanting to the mood of the track that was not really present before.

Also, the extended airtime of Ben Hutcherson‘s much improved growls add a trifle spice to Desolation that was not present on its predecessor. Like – for example – on the delicious dialogue between light and dark on Maw of Time. And nicely underscored by some real heavy riffing on that just pleased my metal heart. It is also on this track that some very doom-ish parts emerge – right towards the end. Maybe a bit drawn-out, but not terribly so and still with a lot of gusto.

Yet, the last piece of this decidedly short track list really takes everything else by assault. ‘So here I rest, I’ve come undone’ – thus starts the stellar From Ruins. And in a way, this track is typical of Desolation. You’ll get proper Doom Metal that comes on a bed of Heavy Metal. If you just listen to the tune and lyrics, it is doom. But add the riffs and solos, this smacks of Heavy Metal like there’s no tomorrow. And this is consistent with the sights and flavors on this record.

In the end, Desolation delivers a tune at more mainstream levels than the earlier records. Which is kind of in line with expectations, simply because no band can endlessly produce real stellar new stuff. Every band will follow that infamous curve that levels out after a while and starts to align with the rest of the pack. Unless the band decides to look at new horizons, which Khemmis did not (really) do this time.

Now, whilst this is the case, Desolation still fills this metalhead’s heart with rock solid metal fare. An enjoyable record that will most definitely keep the pressure on other doom outfits to keep up the pace with great content or be left by the wayside.

Yet for the next album, Khemmis will need to fire up the innovation machine, lest they sink into the swamp of the vile mainstream that is so difficult to get out from later.