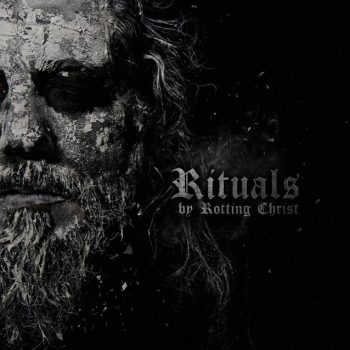 The Greek act Rotting Christ is one of the outfits most rooted into the Black and Extreme Metal genres. Their ascent to unholy glory really took off with the renowned Triarchy of the Lost Lovers back in 1996.

Now, before you start throwing eggs at me: There will undoubtedly always be those who will argue that Non-Serviam came first. But I was never overly impressed by this specific record. And yes, there are other players in the black magick universe from that epoch, too. Especially the more gritty ones from the North that took a liking to burning churches and such.

Rotting Christ consistently evolved their scratchy, yet powerful down-in-the-gutter Black Metal style of the ’90s. First this meandered to a more doom-ish metal type, always with an Extreme Metal tinge. And then the band morphed all that satanic jazz into a Gothic and Dark Metal scented style, starting with the album A Dead Poem. They later lost some of that flavor along the way and came kind of full circle back to their Black Metal roots starting around Theogonia and Aealo. With echoes in Khronos, I daresay. In the end however, the constant search for a new soundscape, whilst keeping with their roots, is one of the lasting strengths of this band.

So, what about their newest unholy brew?

If you want to witness the forces of evil marching down on you with a sepulchral background sound, you came to the right place. Rotting Christ‘s 2016 album Rituals starts like a hellish death march. The take-off sounds like some unclean mixture of Arch Enemy’s Under Black Flags We March (Khaos Legions) and an evilly charged version of the beginning of Fleshgod Apocalypse’s King. And they step right into the thick of their theme. By this I mean hearty stuff, like the invocation of all sorts of demons followed by In Nomine Dei Nostri Satanas Luciferi Excselsi.

Rituals carries a certain Black Metal groove if you get my drift. The tracks pack a heavy crunch, and Rotting Christ deliver it powerfully. But it all sounds like some marching band gone off to worship the Dark Lord. And make no mistake, they have taken the ritualistic route on all tracks, starting with the aforementioned In Nomine Dei Nostri Satanas.

On top of all, the record comes across as very loud, too. So much so that the bass loses itself in this corny jambalaya of sounds. In addition, you get this feeling of undue repetition real soon. After the first three tracks, everything appears to be down to mono-syllables and chants, backed up by marching rhythms. And this is not necessarily what one would think to find on such an album.

The grind – however – is definitely there and Rituals sounds like a fine-tuned, but somewhat gnarly machine. Now, if you take the overarching theme into consideration, which is eloquently described by the title of the album, this does make some sense. Because the string of tracks exerts a somewhat hypnotic and – yes – ritualistic fascination that is difficult to shake at times.

In a way, Rituals represents a continuation!

A continuation from its 2013 predecessor Κατά τον δαίμονα εαυτού. Nothing is really new, but the new album adds much more juice to the tune. And also removes some of the short-wave energy, replacing it with a sort of solemn approach to their tune that was not there before.

And they went deep: As an example, Charles Beaudelaire‘s Fleurs du Mal – Les Litanies de Satan got some sturdy use. Again delivered in some sort of chant that gets under your skin after a while.

That said, there is a certain amount of boredom that sets in after as the record progresses. Using any invocation present coming from a variety of satanic scribes and underlying it with simple or simplistic song structures does not necessarily render an album more interesting.

This leaves me with about three tracks that I could sign off for. Those are: In Nomine Dei Nostri, Ze Nigmar and Thou Thanatou. The Four Horsemen and Les Litanies de Satan tend to follow me around my day like little undead doggies in a scary kind of way. But they come in as close seconds. And still not something I would write home about. And all of this after so many listens.

True to their credo, Rotting Christ again adapted their sound but kept tightly to the Black and Extreme Metal Genre. Rituals packs a powerfully mighty crunch, with heavy rhythms and meaty riffs. Add to that the powerfully delivered lyrics and you have yourself a very sturdy metal cauldron.

The somewhat simple and repetitive structure of the tracks does not really help matters, though. Pitching this record against the cool Aealo or even the somewhat weaker Κατά τον δαίμονα εαυτού, it is a step down from the podium the band was on before. And that is a pity.

Yet, the album still made it onto the list of the 10 Most Popular Posts @ RockmusicRaider. Well done.