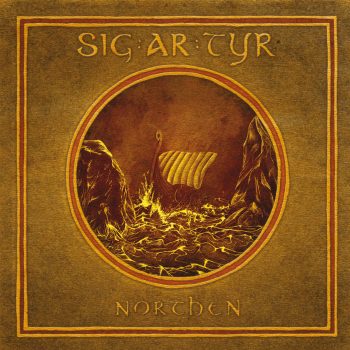 See, it is indeed possible. You can write a complex metal tune without building brick walls so high that you won’t hear yourself anymore. And it can be done with a hike to the epic mountain top without firing up the mighty cheese machine too.

Speaking of which: Here is a contender to metal fame that renders Amon Amarth and their Viking friends awfully cheesy.

We are speaking about SIG:AR:TYR and their newest metal contribution Northen. I never quite knew that Viking Metal adepts brandished their tune in good ‘ol Canada. Until I came across the bands last record Godsaga. It took them some very long six years to hit the metal waves of the North again.

Looking at the metal offering before me, I concur with my partners in crime of the reviewers community: This band is indeed underrated at a level that their brethren Bathory never was.

SIG:AR:TYR really puts the pedal to the metal in Northen – no pun intended – and delivers the ominous sounds of the mighty metal thunderdome. Not necessarily exploring new roads leading off Godsaga, their Pagan / Viking Metal for sure improves on skill and meatiness nonetheless. An additional juicy detail is the fact that the band now really is a band. Daemonskald abandoned the idea that everything, songwriting AND the torture of instruments needs to be the fruit of his loins. So, here we got a real band playing and it shows.

I particularly liked the clear and precise guitar riffs reminiscent of Finsterforst and the substantial and well spaced solos sprinkled across the record. Northen mightily feeds off them riffs a lot like a vampire lustily attacks blood-filled victims. Daemonskald‘s Black Metal rasps and the elegantly sparse, but powerfully appropriate drum-work really pulls this Viking longship smoothly forward. Rowers, shields, and booty – all there.

The theme – oh yeah there is one too – speaks of the migration of Norse settlers, going viking to find new lands. They indeed hit land in what is today North America, but far to the North in Newfoundland. Apart from this confirmed settlement at Anse aux Meadows, there is still a lot of confusion and debate where Vinland, Markland or Helluland really were and to what extent settlements took place. Be this as it will, the story is a tribute to the Norse efforts to expand their settlements overseas and for sure a great background for a metal album like Northen.

I can find little fault with the mixing and mastering job, albeit the rasps could have been woven into this metal fabric a tad more powerfully. As it is today, the lyrics kind of appear in the midst of everything, even letting the guitars take center-stage at times.

Now, once the disc starts turning, Northen steps straight into the story. Every track illustrates one of the sagas – well in truth parts thereof. Helluland takes off with a few ocean wave sounds and – wham – the metal hits you like the perfect wave itself. From then on it is full immersion into a story of vikings, new lands, intrigues and bloody fights with the North American tribes called the Skrælings by the Norse invaders.

Now, in the midst of those crusty riffs and stellar solos, you suddenly find acoustics. None of that symphonic crap some bands all of a sudden throw in, just because they can. But dreamy guitar additions followed by more … metal. I could lose more words, but just go ahead and check out the pleasures of Skrælings or Krossanes for a taste of this.

Northen is somewhat of an enigma too: The band’s penchant for three chord melodies and relatively simple song structures in general takes nothing away from the record’s almost magnetic allure. And make no mistake, you will find a story. And whilst you will find choruses in some, there is no trace of catchy howling about, timed to three minutes max. The metal itself serves as the engine of soundscapes driving this epic and monumental piece of work.

In the end, SIG:AR:TYR delivered one of the best metal works I had the pleasure to listen to in 2016. Northen ships a meaty, ominous almost cathedral-like sound that pays tribute to the lore of Norsemen going viking and trying settle faraway lands.

You can almost feel the salty sea and hear the war cries of the skrælings as they attack. Despite simple song structures, the record delivers metal the way it was supposed to be. In a way, Northen is as much a surprise this year, than Batushka was in 2015. Cool metal platter, I am already waiting for the next.

Ed’s note: And – lo and behold – the album made it to the upper reaches of the 2016 Top 10 Records. Also, Valfreya tilled that very same patch of land, too. Why not look into it?