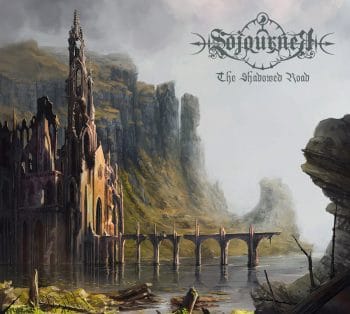 Damn, the RMR deck crew is late again. So very late. Late to the game of catching the best albums of any one year. And sometimes, this is a pity.

Because some of those records might (just might) have made it onto the Top 10 of the year in question. I could now drone you to despair by making you listen to all these reasons why this happened or not. But, bugger it. Ain’t important no more.

The Shadowed Road of Sojourner would be one of those records. A record driven by a band with a purpose. And – I daresay – with the courage to improve on style and delivery, regardless of the dreaded sophomore cliff looming straight ahead.

If you remember, Empires of Ash – their last record – really crisscrossed the territory folks like Summoning or their off-shoot Caladan Brood already occupied. They did this with real instruments, though. I give them that. And this is also what got our attention in the first place. Less plastic, more crunch and wind, that kind of thing. As we found those juicy flutes and other nice things on their first album.

Now, I truly still find myself in Atmospheric Black Metal terrain, but this mixes with much more melody and ambient at the same time. In other words, The Shadowed Road gets us an upgrade to a much more mature offering. One with real substance, and less of the mad piping seemingly coming from Azathoth directly.

Sojourner upgraded their Black Metal trappings with a truly meaty guitar contribution that usually lives in the vast realms of Death Metal. But I kinda liked the mix of Death Metal elements, acoustic piano interludes where there should be none, flutes and the dreaded, relentless beat of Atmospheric and Melodic Black Metal. All of that thrown into a mighty cauldron and cooked to perfection.

And talking about pipes. Chloe Bray is still at them big time. Only on this record, the acoustic and ambient parts integrate much better. And she provides much more prominent female backup vocals.

Yep, backup vocals. You heard that right. Already on Empires of Ash, we bemoaned the fact that compression was really – and I mean really – high. A goddam, fucking wall of bricks. Only on The Shadowed Road things got worse for some. Emilio Crespo‘s growls dominate the tune, which is exactly how things should pan out.

Yet, as the female contribution goes, drums and rhythm guitar mostly run roughshod over Bray’s ethereal chanting. And this makes her sound like the main culprits of outfits like SAVN, a fate that she does not deserve. So, we have these backups lost in the mix somewhere, and the master fixed it neither. And this will knock off a point from the rating. Because this is just plain bad.

Sojourner still sport a goodly resemblance to folks like Ashbringer, but the growls really move towards the Melodic Death Metal realm. Titan – for instance – contains passages that seem to step straight out of the world Insomnium from the North occupies. Even if the band returns quickly onto more traditional Black Metal shores.

I also found this willingness to experiment, this gallivanting about styles and flavors, which is most refreshing on The Shadowed Road. Ode To The Sovereign – for instance – takes up the Black Metal scheme big time at first. Only to inject some typical galloping Heavy Metal rhythms into the fray a bit later. And to marry it a few moments later with Bray‘s ethereal flutes and chanting.

After a while, however, the dreaded repetition bug strikes. Towards the end of these 51 minutes of Black Metal pottage, the tracks and themes kind of flow together. Which somewhat is the definition of pottage, come to think of it. Even if they somehow try to reverse course in The Shadowed Road – the title track.

In retrospect, Sojourner navigated the sophomore cliff very well. The Shadowed Road is full of risks, though. The band did not – as many do – just move on with the same style all over again. Instead, they decided to jack things up some, add some meat to their tune and let ‘er rip.

And the outcome is a tasty, yet rough assembly of metal shards. All of that dominated by Atmospheric and Melodic Black Metal, a sturdy mix that I found pretty hard to resist. Their knack to mix flutes and other acoustics into this stew just add to the allure.

Sojourner indeed moved out of the shadows of the plastic synthie monsters like Summoning and joined the crowd of bands wielding real instruments. A real step up in their game. If only they would have paid more attention to the mix and master, this would have been so much better.

But apart from that, I can find little fault with The Shadowed Road. This is truly a talented bunch and they still have ways to go. Good stuff.