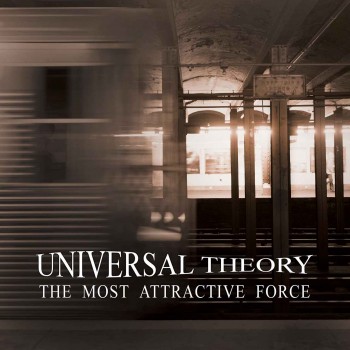 Universal Theory beckons us. With their newest and best, called The Most Attractive Force for release to the esteemed public by end of August 2015.

Now, wait a minute, you bunch of Einsteins! Was the Universal Theory not the Theory of Everything? But this is actually a band joining us from Spain. And you know what? Sometimes I wanna whack these bands for their choice of brand names, but then again, this is kind of part of this genre in a way.

Universal Theory‘s brand of Atmospheric Metal (coming complete with integrated pop metal attacks…), inevitably reminds me of the German gig Blutengel. The Gothic electro-pop outfit with the vampiric lead brandishing this atrocious English accent. This guy likes to rumble away in a sub-atomic voice at some sort of musical concoction. Or again Rusty Pacemaker, who – astonishingly – brandishes the same set of tools.

True to this general direction, Universal Theory‘s 2nd album The Most Attractive Force delivers all its tunes in a Doomish Pop and Gothic Metal setting 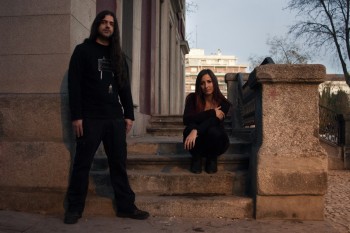 of the Atmospheric kind. Shoegazing away with heavily distorted guitars, rumbling bass and some ubiquitous drum work.

A deep, dark voice – this being Jesús Pinilla Hoyas – telling us something, interspersed with female vocals provided by Maria José (Majo) Martos De La Cruz. And as is often the case with these gigs, it is the female vocal part that carries the battle.

Majo Martos sounds rather restrained – or should I say constrained. A pity because she boasts a jolly good reach and could do more in this department. I would have personally liked her to be more center stage. Not to forget Beth Hart, the third member for this record, who provided the piano interludes towards the end of The Most Attractive Force. Metal Hell Records handles the marketing for this album.

Most unfortunately, I received an MP3 version that is so highly compressed it actually makes it difficult to listen to the record in any decent way. And I have pretty decent equipment handy here. We reviewers will do our work with the material at our disposal. And if the quality is bad, then this will inevitably have an effect on the review. As it happens, the vocals are almost drowned in a variety of musical elements and don’t come OUT!

And to the point made by the band itself, the resemblance is indeed there. Some of that stuff kind of sounds like the late Tiamat. Not that their latest concoction really impressed us.

I daresay Universal Theory will have to work hard to reach the quality of the latter, but nevertheless have produced already a remarkable quality of songs in this record. I would recommend the tracks Before Sunrise, Unfinished Desire and Romance I & II.

Looking at the skill of the musicians in this here magic brew of wonders however, better and more precise mixing and mastering would do a world of good. The talent is there, the music is there, but the music has real trouble to express itself.

So, what are you waiting for, guys?

I know at least the mastering piece costs a mint, but you know what? If you can pull that one off, it will have an immediate effect on quality and get you much better reach.

By and large, The Most Attractive Force is a creditable effort by a band of two – or three, depending on how you look at it. If these guys would have added some more juice and power, beefed up their tune, and worked on precision a bit better, then this would have gotten them a much better rating.

We did, however, appreciate that they took the difficult and unknown route to fame. And tried something of a newer kind into – for them – uncharted territory. I will watch out for more to come from them.