Rusty Pacemaker. Quite a stage name, ain’t it? Well, fear not, rock and metal fan – ’tis all about music. Rusty hails us from Austria, home of outfits like Illuminata and Summoning; a known turf for Rock and Metal.

It must be the steep valleys over there spawning this kind of tune. And it is his authentic craftiness that really got me interested to look at ruins, the sophomore full length album released earlier in 2015.

Rusty Pacemaker is an (almost) one-man band, scarcely seconded by Lady K on some tracks and, more prominently, by Franz Löchinger on drums. But more to that later.

Rusty by the way never formally learned any instrument and professes not to know how to read notes. Just picked up a guitar, checked out a few riffs, got going and taught himself how to build a studio. And why the hell not? This is already a laudable action right there – and with a sizable result to boot.

The style of ruins is somewhat of a mystery!

How best to call it? Ruins boasts some sort of a unique dark Progressive Rock with subdued Doom Metal injections. All of this served hot with a doomish twist, not unlike some parts Universal Theory just published not so long ago. Gothic Rock and Metal for some parts, at times almost veering off into Doom Metal proper. Somewhat subdued riffing gets thrown at you on most of the tracks. The song structure stays somewhat monotonous, kind of a cookie cutter style – not much spice there in this goblet of blackened pirate rum.

The slow-motion machine gun staccato of even level lyrics delivered in an equally monotonous voice has this tendency to wear you thin after a while. And this is a real 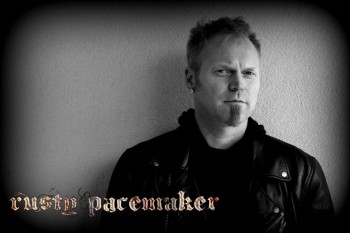 pity. Because a little more power, variation and oomph to deliver them lyrics would have done a world of good. Luckily Lady K comes on board for some short injections of airy female moments. But really only moments.

And here we are at one of the main faults of this record, which make my teeth grind some. The vocals are sometimes heavily off-kilter, giving this record kind of an unfinished and amateurish flavor. Some steep whistling included.

And I daresay, some heavy compression shows its ugly face on some of the tracks. And did I hear some auto-tuning on this disc? This steals some important credit from ruins, too. A real pity! In addition ruins throws a phenomenal amount of data at you. Some tracks display so many elements, somewhat carelessly strung together, that it becomes difficult to listen to all of that at once.

Ruins is ruined, then, eh?

Nope. Actually the album is pretty good. Indeed ruins has got a lot of great stuff to show for. First, the mystique of the record is that it is totally original. A record and an artist steadfastly refusing to be classified – generally a good thing and meaning they have still a lot of potential upwards.

The tune is full of different elements, kind of noisily linked together that will only become apparent after a few listens. Drum work is – whilst a little simplistic most of the time – greatly executed, very precise and professionally done.

Ruins actually gains steam towards the end, not the other way around.

This is where the real good stuff sits. In Candlemass for instance with its Doom and serious Gothic Metal airs. Or the scratchily rocky Matter over Mind that really got on the better side of me. And again, it is at the end of the track list where good stuff lurks with the funky Pillow of Silence. The record suddenly displays some serious crunch coupled with a somewhat solemn approach to things. Garnished with remarkable riffs and solos that command respect.

In the first half, the pseudo punkish track Made of Lies displays very good and fast rhythm, a great solo too. But the lyrics and vocal performance almost killed me. Ocean of Life has its merits, too. Lady K graces us with an appearance in this one. The Game actually features some sort of a reggae style inlay for a few moments in an otherwise insipid song.

ruins tastes like one of them rough diamonds. You can feel the raw talent and potential that is still out there, ready to be shaped. The outcome, though, is one of hot and cold at the same time. Great creativity and authenticity is always at the forefront, yet the execution will need some serious emphasis. The result is a somewhat rough mix, and a mastering that did not quite gloss over the rough edges. To top it, a little more precision on the vocal side, plus a few more ounces of oomph, would improve this record to a great extent. Having said all of the above, ruins is a complex piece of work, never boring and surprises at every turn.

So, if an eclectic mix of Progressive and Doom Rock and Metal with a rebellious twist floats your boat, you may want to give this album a serious listen and invest a few bucks into Rusty Pacemaker.

Go and get it:
Not available, gone forever. Damn.