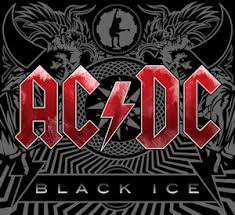 At first sight it is a more subdued form of their former more exuberant style. Kind of sounding dangerously like Krokus in places. You know, the Swiss hard rockers that recently pulled themselves back together (or is it more the other way around – the debate is open, folks). And funny enough, towards the last third of the album, the music gets more bluesy. They start to sound almost like an off-shoot of sorts of Texas specifically in the track Stormy May Day (my favorite). Not sure what they drank. Bourbon anyone?

It also appears that the producers intended to inject the old, Bon Scott era style of music into Black Ice. And – in truth – they only partly succeeded, which is by the way and really (really, really) a (very) good thing. Because the outcome is something really rock solid. And much more mature than the stuff they produced in between Back in Black and this one here. Also, remarkably, this album contains almost no fillers, whereas in former records you always had to deal (or suffer) with those.

And no worries: All in all, they remain very much true to themselves and their style. No exuberant electronics, no symphonic interludes and keyboards to the devil. Just hard guitar sound led by Angus Young, background drumming made by Phil Rudd in the old, repetitive style and the bass man – Cliff Williams – who almost falls asleep at his trade. Of course always with the trademark yapping of Brian Johnson at his best. Screeching away until our ears hurt. And this will give you the unique sound of AC/DC, which they hopefully will never lose.

And the success of Black Ice speaks by itself: Debuting at # 1 in the charts in 29 (twenty-nine – exactly!!) countries is something that was never there before and a record that other bands first need to beat. The record won a large number of awards and sold furiously all across the globe. Begone all you change addicts, wanting to have a different style every 2 years, lest a band grows stale. The Proof of the Pudding is in the Eating, as we say. This band has consistently delivered a style thought dead like some 20 years ago. Ha!

Whilst still lacking substance, the lyrics and the song making in general have improved. I have never heard something so neatly produced by this gang than this here record. Well, looks like they have finally grown up (or were grown up), but still remain true to their style. Or do we see the ugly beast of mainstream raising its terrible head? Difficult to tell, really. So, it may very well be that AC/DC injected some mainstream. But the final product is still this rowdy band from Australia.

Black Ice is a well rounded album, featuring old style AC/DC concoctions, together with newer, better sounding tracks included. On the other side, it does sound to me a tad too sanitized. I am missing the hard edges, the rude and ugly. Guys, don’t get politically correct, even at your old – ahem – refined age, I wanna say. It just don’t fit.

I have listened to this record all over again from time to time and sometimes intensively so. And I still love it. Good job!