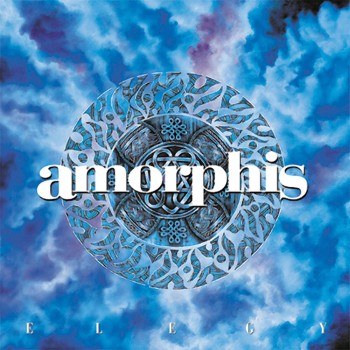 We write the Year of the Lord 1996. Amorphis just about came to some real fame with their heavy and very Death Metal oriented 2nd studio album Tales from the Thousand Lakes. Everyone now eagerly awaited something similar from their next concoction.

Now here comes their 3rd studio brainchild Elegy. And what have we found? A hellufa change: Amorphis is happily throwing in Folk and synthie pop elements. Stuff laced with very heavy Melodic Death Metal – growls and all. This mixes with good old Heavy Metal, atmospheric passages and ’70s style parts on keyboards and guitars. You got it all. I can thus fully understand why Elegy got very mixed reviews back in time and ever since. Some reviewers hating it and others loving it.

And what happened with Elegy?

Amorphis – invading us from the cold Finnish North – changed (or tried to…) from their Death Metal roots with an attempt to morph into something else. And out came this … stuff.

And I admit that at first I was not impressed.

But the longer the listen, the better it got. This is very complex and high quality fare and you need to REALLY dig into it to get down to the nuances. Even the ’70s style keyboard work comes through alright on Elegy. Keyboards used like this usually just make your teeth grind, it is THAT bad. But here, nope. Sometimes the keyboard even combined with the sitar (of all instruments…), a surprisingly good cocktail. The band did however not quite make it into the ‘Best of…’ charts of the time. Not surprisingly, though.

The album also smacks of the tastes and flavors of the time some 20 years ago. Some of that stuff sounds similar to Tiamat and their own mid ’90s offerings. Not the same mind you, but similar in overall look and feel, minus the full metal jacket crunch perhaps. And – again – Amorphis sounded very different in 1996 compared to their newest album Under The Red Cloud released earlier in 2015.

Elegy gets its lyrical inspiration from the Kalevala!

This is an epic piece of Finnish poetry collected back in the 19th century. And it serves as cannon fodder to satisfy the gloomy eyed metal masses for their hunger of heavy lyrics underlying their music. Even if the spoken word is often somewhat lost in growled texts. The Kalevala is indeed a good source for this kind of purpose, the lyrics being downright gloomy at times, but very well written.

You have to approach Elegy with an open mind and give it your fair share of time. If not, you will for sure put it off as too repetitive in song structure (true) and perhaps a tad too mainstream at times (true again) and confused in style and direction (yep…). But then it gorges with progressive elements of all sorts. And it is there, where its real value will emerge. It is this apparent confusion – the mixing of different styles and directions – that renders this album a good album. Pulling off a progressive piece like this is always an indicator of good musicians at work – not an easy feat.

And what about their tune? Any good?

One of the sad facts of Elegy is that Amorphis should have pulled more unplugged stuff – just check out the acoustic version of My Kantele at the end. Makes me want to pour a Whiskey and check out the porch at midnight. Mind you, the plugged metal version in its somewhat doomish robe, performed death metal style complete with growls is stellar too.

The music does of course not just create itself, it is made by the band. To be commended is the great bass work provided by of Olli-Pekka Laine, without which most of the tracks would have sounded flat – or flat-out terrible. Not to forget Kim Rantala on keyboards – taking over from Kim Martenson – literally playing a crucial role to the overall success of the record.

Then the straightforward graveyard growls still provided by Tomi Koivusaari on Elegy are – well – not the best we have ever heard. But strangely alluring with their subdued quality, adding to the overall flavor of this metal dish. Together with the clear voice passages provided by their then new vocalist Pasi Koskinen. He went on to continue with the band until 2004. Not to forget Esa Holopainen‘s guitar prowess. This creates this irresistible mix of progressive elements making up this album.

The record is full of good tracks!

Better Unborn with its death grunts opens up the album in a very surprising fashion. Against Widows continues in the same vein – very complex that one. The Orphan surprises with a 70s flavored melody. Complete with true era-style keyboard parts, mixed with some crunchy metal and ending with a nice solo-ish musical offering. The structure of the song somehow always reminds me of Metallica‘s Unforgiven II in some parts. I like this one.

The title song Elegy will test your patience. It will go through some pains to really open up. But once it does, it will reveal its hypnotic self to you – pretty good that one. The alternating clear vocals with death growls are intriguingly well done. Further, Song of the Troubled One and Weeper on the Shore – the latter with a pretty stiff riff – are noteworthy too. Not to forget the aforementioned versions of My Kantele.

Nobody really cared about Cares (no pun intended). Not sure why this type of tune actually made it into the album. A waste of good disk space and it actually pulls the quality of the album down. The same is true to a lesser extent with Relief. But they are both in the album unfortunately – fillers in the best sense.

The 1996 vinyl delight Elegy of Amorphis is good!

And I mean really (really) good and refreshing Progressive Metal. A sauce dripping, mouth-watering slab of metal that is a pleasure to consume. To really sniff out its many nooks and crannies, you will need to give it a few pretty detailed listens – just in the car will not do.

The album will mature on you and crawl under your skin to follow you around for some extended time. To be able to pull off such a complex Prog Metal album is usually proof of the quality of the musicians involved. What I especially liked with Elegy is the fact that they pulled all this Prog stuff on us, but the band never lost track that they are essentially a metal outfit. And their music shows it. I am impressed.