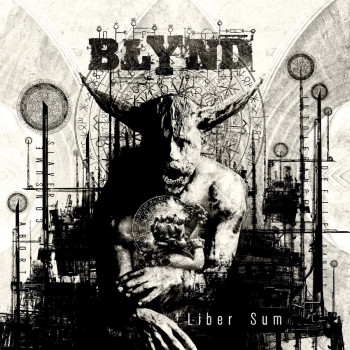 Picture this: The genteel nation of Cyprus. Loads of Souvlaki, Tzatziki, Mediterranean Salad and some local wine on the side. Lazy drives around the countryside with visits to beaches and places unknown. Boat rides and snorkeling tours. Nice, gentle music, warm winds caressing your skin. Drinks at the bar with sunburned friends, hot chicks and all. Well, there you go, Liber Sum (I am free in Latin), you will think.

And now this: Harsh, pitiless metal sounds assaulting my ears out of my headphones, no clean singing allowed. Genteel little nation in the midst of the ocean? Nope.

Growly greetings from the metal abyss on the island instead. And to top it, Cyprus does host a significant metal community for such a small territory, Blynd being one of them. There won’t be no nice breakfast by the sea with some beach time later, I am afraid.

That is how the 3rd studio album Liber Sum from Blynd presents its thrashy metal self, which finally released by November 2015.

The band displays a meaty, crunchy sound – something of a mix between Havok and Toxic Holocaust in style – without a hint of clean vocals and a melodic twist to spice it up some. And it is indeed a worthy next sequel to and a step up from their last 2012 record Punishment Unfolds.

respectively), but really took off in 2010 with their first full-length studio album The Enemy, followed by the aforementioned Punishment Unfolds.

The album art is worth checking out as well! Created by Gustavo Sazes – a well known artist in the metal universe – it captures the theme extremely well. Giving you a sense of foreboding of something mystical that is afoot, built over the ages to the present day. Not bad at all.

Thrash Metal? Yep, no doubt. Melodic Death Metal? Oh yeah – quite some influence. You’ll even get a blackened something from time to time with some tremolo picking on full display on some of the tracks. A whiff of Mythrias, if you will. Also, the overall theme has this tendency to stray into the realms of Extreme Metal. Maybe more than what is good for it.

Symphonic Metal? Nope. Does not quite qualify. But there are some interludes of the symphonic kind in this sea of molten metal. Actually, elements of all the above are woven into this island metal fabric Liber Sum is presenting us with, plus a pinch of Black Metal. And powerfully delivered too.

All of this is rounded up with quality lyrics that have for sure needed much time to build.

Liber Sum has no discernible flaws as production goes, mixing and mastering on the upwards side. Promo copies often suffer from compression and other inconsistencies, but here – no major pain points with no element lost in translation. Liber Sum comes however across as a bit repetitive at times towards the middle of the record. But then they pump up it up again towards the end and gone is the boredom. Injecting a few more riffs would have helped the overall quality of the disc.

Now to the tracks!

Lo and behold, Liber Sum‘s first song Bread and Circuses starts with a friggin’ intro (and I hate intros). Some female chanting ‘Sic Transit Gloria Mundi’ – the line they used when enthroning the pope until the ’60s or so. By Loki – this record starts right into the thick of things. Much to my relief, a metal tsunami washes her away real quick, not to be heard again. And off we go to a very good metal start. The phrase and the heavy theme surrounding it is – by the way – repeating itself throughout the song. This first track is one of the best of the album.

Phobos continues to pump up the volume – even displaying more crunch. Barbarians and Aes Cyprium – my favorite on the album – take you for a furiously wild ride. I absolutely love those two songs. And then Liber Sum (the title track) takes off relentlessly, cutting things about. Very bare bones thrash metal with no ornaments.

Further noteworthy tracks are In the Epicenter – featuring stellar riffs and melodic passages – and Al-Kimiya one of the centerpieces of Liber Sum and the most coherent and melodic of all of these chunks of red hot metal.

The last piece The Kingdom Within takes you to more epic shores, ending with a beautifully underlined monologue, featuring Charlie Chaplin in the movie The Great Dictator back in 1940. Stellar.

Liber Sum presents this alluring toxic metal cocktail that makes me want to listen to bands in the first place. All there: Hard, crunchy, down’n’dirty metal, woven into some melodic and atmospheric passages, spiced up with speed and good lyrics.

And Blynd deliver all their own special brand of island thrash on a bed of Death Metal that comes out in furiously brutal waves. And it is complex, hard fare. You will need a few listens to really get to the roots of the record.

This is good stuff – the best and most comprehensive piece of work Blynd produced so far, but nothing for the weak at heart. Well done, band, good job.

And the icing on their metal cake is that they made it onto the 2015 Top 10 Records as well. Cool.