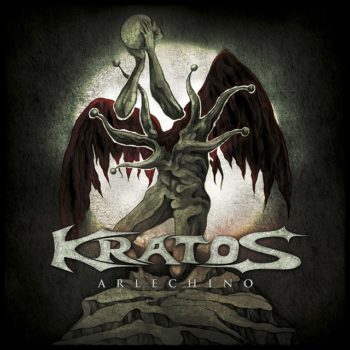 It is really difficult to find good, new bands – fresh blood, if you will – still active in the Gothic Metal playing ground these days. Most were already covered, and they are legion.

And we heard and saw it all, didn’t we?

The ubiquitous female front, the painted, black-clad band. Pretty much all sound-alikes, projecting stereotypes, wanting to achieve something that was already achieved yesterday by many and mastered by few. Right? RIGHT?

One could indeed think that this is so, but not so fast. As always, there is bad, ugly, but also good to be found in the genre. Like the dismal SAVN or bands like Sirenia that improve with age and get better at their game.

And then you have not met Kratos yet, and their Arlechino.

They are now just about to get their second full-length album out into the open this May 2016. And their punch line is clear. Dark Gothic Metal is the dish on the menu – at first. But then, a little into the album, the style is all of a sudden studded with loads of Progressive undercurrents. And this mix is what really got my attention. As another added bonus, Kratos really worked on their Beauty and the Beast routine for this album, letting this overused morsel of metal delight shine in a new light.

Then they worked some more on their black edge by sloshing some fine dissonance into some of their tracks. To top it all, the band has got this knack to keep their tracks varied enough to avoid coming away boring in an already overloaded genre.  All of that provides this interesting amalgam of a style mix that will keep your attention throughout the record.

The band is around already since the late ’90s. But after an EP produced in their early years, ‘only’ one full-length studio album in 1999 ever saw the light of day. Until this one appeared on our radars.

In between, Kratos unleashed the odd single here and there and participated in a few projects, but not much more. This is the reason why Arlechino integrates some older tracks too – like in way older tracks. So, the record is very much a recipient of what has already been produced AND some nice new material.

I am already intrigued by the intro.

Like a Janus Head, Arlechino first starts with some of the typical, symphonically styled lines that we are used to. This starts of a little like Nightwish‘s Imaginaerum, only the song structure is very different. But then – bang – Black Metal infused Gothic Metal rolls off the tape. With a friggin’ tremolo to boot, double bass beats and genuine growls. This stopped me in my tracks when selecting albums for the pipeline. I was already about to get up and leave to go places. But after this start, I sat the fuck back down like a good boy! No kidding, this really happened.

The highlights after that?

Some Gothic style Fishing will come your way. Now I like the slightly dissonant style of this track. But Beyond Knowing – an older track – will really crunch its way into your consciousness, just to prove that the Beauty and the Beast concept can be good if used with care.

Now I do love the It’s Empty series. This is the point where Arlechino veers more and more into Progressive territory. Even if they try to stay glued to the Goth and Dark Metal themes.

This gets me to a very interesting point of this album.

Starting off as pure Goth-sloth back in the ’90s, Kratos experimented more and more with new stuff coming along. Slowly morphing their style to a new reality of their own making. Really interesting to have that in one single full-length album. To illustrate, just check out the timing of releases after the first full length got unleashed.

2002 got us Reverse Effect, 2010 gave birth to Beyond Knowing and – last, but not least – 2013 graced us with It’s Empty. If you want proof, quickly jump to the bonus track Reverse Effect. And what will you find? The Gothic theme with the Beauty and the terrible Beast. And again, it is the bonus track actually providing one of the better tunes on the whole album.

Arlechino is an interesting one. A mixed bag, so to say. The concept is for sure nothing new. But where Kratos carve out their niche is in the execution. Growls well delivered. Beauty and the Beast exists, but not overwhelmingly so.

I really liked the slight symphonic side throughout the record, gladly never erring into bombastic territory too much. And here is a band that always remembers its roots, even if they do test the waters and go somewhere else.

And gladly, they never tried to be an opera, unless what other bands in the genre quite unsuccessfully tried to achieve. So, well done. I like the record and already look forward to new material that I am sure will follow.