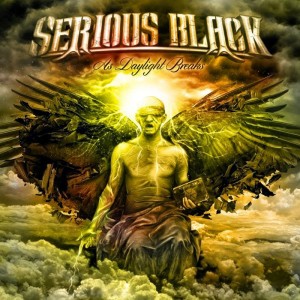 First, I was confused. Very confused. What does Harry Potter do in my metal world?

But bad naming apart, then I really started listening to this and – lo and behold – it is actually pretty good. Up to very good for some of the stuff they present, yet still a mixed bag.

Taking off to a wild mix of styles – some of it pure Heavy Metal, others in the Melodic and Power Metal area (and they like to think of themselves as being the latter). Sometimes they err a tad too close to the likes of Avantasia in my book.

And this mixed in with some Progressive, Pop and Symphonic elements gives you the essence of what is called As Daylight Breaks, the 2015 debut album from this band of celebrities.

Mind you, whilst fast and serious, there is nothing really new in there. Lest being surprising in a way that it should incite me to leave my comfy chair. The style is after all reminiscent of ’80s and ’90s crumbles, of music we heard already before somewhere.

Some parts remind you of Dio and the work they did way back in time (R.I.P. Ronnie James). And indeed others too. This again harkens back to the heyday of Iron Maiden and the likes. But after all, very well done and for sure professionally executed. And I always like to enjoy a good piece of metal with my Bordeaux – or ahem – energy drink.

There are negatives in there nevertheless. The mastering sucks sometimes, as it often does in these new productions. Too many channels in there that refuse service. So, depending on what kind of equipment you listen to this, it gets all kind of lost in a mass of different elements that don’t mix well.

The solos – the all important solos – are few and far between, and the sound they produce is for sure fast, but for my taste not corny enough. No hard edges, no abysses. All kind of super-white washed and almost fluffy in style. And then they start to mix in too many electronic elements in there (the evil synthesizer and keyboard again). This leaves some of the tracks with a distinctly cheesy feel.

What is done skillfully by Nightwish is done less so in this record. And sometimes I had the feeling to listen to The Rasmus (not that the latter are bad in any way, they just have their own unique style).

This all ends up in some sort of politically correct amalgam people produce when they want to please everyone. Which in turn means that this band still needs to find its identity that is true to itself.

I seek No Other Life, followed by Akhenation and Older and Wiser are the best tracks of this production. And once you suffered through about 60 seconds of mediocrity, My Mystic Mind turns out to be remarkably good and rocky. A pity that they make that kind of mistake. People’s attention span’s are not long enough to make up for intros this massive. It just does not work very well.

As Daylight Breaks (the title track) is a nice ballad. But to me not crisp enough to be really outstanding and to be called a rock ballad. And yet again something we kinda already heard before.

Astonishingly, the bonus track Someone Else’s Life is a great add-on to what is already there. And on top of that it includes a stellar solo. So why call this song a bonus? This is just beyond me. On the other hand I am asking myself why the Genesis record No Son of Mine made it onto this here Limited Edition album.

But by and large, this is for sure a remarkable, good piece of metal and a very impressive debut album. Knowing that getting from zero to some celebrity and to actually have people listen to stuff is awfully difficult.

It is however not a match made in heaven yet, as some of my co-reviewers like to put it. Too much mainstream strung together with some very good sun rays that let us hope for the best.

So ways to go still – and we hope that their next record will bring relief! At the same time I would salute them for a job well done nonetheless.