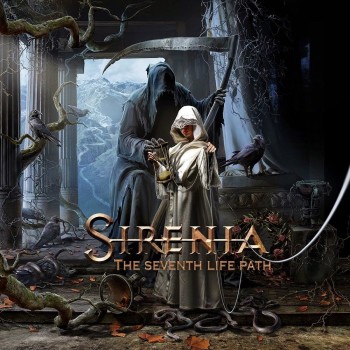 You know, I like Gothic Metal and Symphonic Metal. I really do. It is usually more melodious and varied than the more straightforward types of metal that are existing out there. And after a weekend of down’n’dirty metal crunch, some Symphonic band-aid to soothe my bleeding ears is a welcome change.

But here I am listening to the Spanish/Norwegian Gothic Metal band of two+ Sirenia‘s latest studio album The Seventh Life Path. And already I am confused.

No doubt: The talent at work is impressive. Morten Veland founded the gig back in 2001, the multi-instrumentalist In-Chief. And Ailyn Giménez serving you with vocals since 2008.

Since its inception, Sirenia produced 7 studio albums, with the 2015 release The Seventh Life Path being the latest (get the drift..). The music displayed on the album is complex and varied – very Gothic Metal in style with a Symphonic twist. And – unfortunately – so very pop too.

Aylin’s vocals are very precise, not one note out of tune. But a bit watery and compressed to hell in contrast and quality. This often makes her voice difficult to understand. Her reach is by the way quite remarkable – she displays astounding pipes that Dani Filth would be jealous of.

The cliché is almost complete – Ailyn the perfect archetype of the Gothic band front chick with Morten Veland playing the beastly part. Actually, only Leaves’ Eyes does it better. But where the latter are authentic, the former come across as somewhat stiff, robotic and artificial.

What is the confusion with The Seventh Life Path all about, then?

First, we find ourselves in Gothic mainstream. Methinks that I covered this kind of material before and it was called SAVN? No, obviously not. Leaves’ Eyes – one of their worse concoctions? Nope, neither. Amaranthe of the poppy field. Sounds like it at times, but – again – no. Hells bells! So, must be Tristania, nope neither. This was Morten Veland‘s alma mater.

The style also often sounds like some sort of Nightwish with an Amaranthe-ish dark twist. And then again, The Seventh Life Path goes A-Ha on me, displaying a style of vocals displayed in Scoundrel Days. Yep, the very same Synthie Pop band gone Pop Rock in the ’80s, going strong until about the mid-’90s.

Then there is the issue of over-compression that really shows in this album.

Not sure why they so overload their work with different elements. It just does not come out right and the protagonists often get lost in this Spanish armada of over-synthesized elements, instruments, choir – you name it.

A good example would be The Silver Eye. It’s got all the trappings of a stellar song. Just to lose itself in a gazillion of elements and a somewhat confused song structure to boot. Holy Cow – what a pity! The compression is so hellishly bad in some parts, it just makes my teeth grind. And all of that with a metallic tinge – like in bad and too much Liebraumilch in a backcountry English pub, morning headache included.

On top of all that, it seems to me Sirenia forgot that they are not Nightwish or Epica. Why attempt to go symphonic on people in this way in some places of the record – even with a darker approach to things? This just cannot come out very well, which is amply demonstrated on this disc.

And what about the contents of the record?

Here is one for the lyrics. Well, hmm, diplomacy will make the day: The written and spoken wording will need your serious attention and I would urge you to take immediate action. Or – in other more direct words – how the fuck did this ever get beyond their grammar check? Okay, I get it – these are two non-English speakers trying to make sense out of the English language. But, this is a LOT of artistic freedom right there. It is not only the grammar, but it is also the contents. “Drives me insane” as the very last sentence says in Concealed Disdain.

The tracks themselves on The Seventh Life Path are mostly okay, some with a song structure that would need some rework. As already mentioned before, a lot of them indeed have a flavor of something we already heard somewhere, but Sirenia have managed to sprinkle their tune with a darker metal sound. And there are other dark metal moments in this record that always make you hope that things will improve in time. But sadly, they don’t.

The guitar work is pretty good too and often brutal in approach featuring heavy distortion. You will encounter a stellar riff here and there – amply demonstrated in Serpent. Once My Light contains a somewhat atmospheric one too, in line with the very Gothic theme of the song itself. Check out the video!

The percussion, whilst overwhelming at times, is pretty good. But again – the masters of mixing and mastering made this sound like a badly synthesized drum machine. Which decidedly it is not: Jonathan A. Perez actually did the drum work on The Seventh Life Path.

Now, Gyula Havancsák managed a very decent album art cover for the album. It appears that the Sirenia crew wanted a white-clad maiden with death behind her. Depicting a magical Z or something. I really love this one. Could be straight out of Morrowind.

I really tried hard to like The Seventh Life Path and not hate it.

This review has been written, re-written and written again. Music listened to on high-end and low-quality devices, driving with me in the car, bike rides et al – you name it. It just did not fit and always managed to fall off the podium again to land in the gothic rushes on the floor.

There is a lot of good in there, no doubt, but also a lot of evil in their tune. The bad is mostly technical and structural, giving me the impression that this record wants to be something it cannot. And the good does not come out too well.

Sirenia will need to get back to a less compressed and less synthesized, simpler and cleaner sound – fewer elements and more crunch and quality. If they would have managed the mixing and mastering better, I daresay this review would look much different.