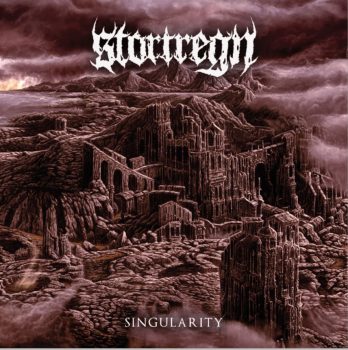 It looks like the City of Calvin in Switzerland is a haven for Black Metal. RockmusicRaider just covered Rorcal – a somewhat extreme, very black pot of this kind of #metal ale – and now we are finding more of that. Not sure if the nice and politically correct people around the UN compound are aware of that. Or perhaps they are secretly part of the audience pouring blood over themselves? Who knows.

What strikes me with the Swiss band Stortregn right from the start is the guitar work. Straight from Heavy Metal heaven.

Nothing in their 3rd full length album Singularity could be farther from the truth. Indeed, if you get to the opening piece of the album, you kind of expect Bruce Dickinson to take over, but nope. A special form of speedy Blackened Death Metal awaits a little further down the road, just around the next corner. And they appear to follow in the wake of outfits like Cradle of Filth, so much so that I am hearing Dani Filth and his scream straight as the opening shot.

So, what have we got ourselves? A CoF tribute band?

Well, not quite. You’re getting a blackened version of Scandinavian Melodic Death Metal meeting Switzerland, something like Insomnium without clear vocals and a Black Metal twist. Undoubtedly, the Cradle of Filth influence is mixed into this magic potion big time. Singularity will however serve you with a pretty stiff mix of metal and acoustics, cumulating in their own brand of tune.

The band formed back in 2005, letting loose a first EP in 2008, then followed by their first full length The Uncreation in 2011. 2013 saw the appearance of their sophomore studio album Evocation of Light. Now, with Singularity they upped the ante to a new degree. To pimp this up some, the album features a number of guest appearances, notably Steffen Kummerer (Obscura, Thulcandra), Ville Viljanen (Mors Principium Est), Simon Girard (Beyond Creation) Vladimir Cochet (Mirrorthrone, Unholy Matrimony, Weeping Birth). And unless other bands, this boosts the vitamin level of the album and also explains the ghosts playing guitar on this record. To their credit, they also played the 2015 Wacken Festival, being one of the finalists of the Swiss Wacken Metal Battle.

The tracks takes off with a vengeance!

Just check out their aforementioned first assault Enlighten Salvation. You just gotta savor this: An acoustic guitar kicks off the tune. Just when you ask yourself where this might all end, an insane, great fucking solo of electric guitars takes over for the first minute or so.

Just to be surpassed by a thrashy, speedy version of Dani Filth to assault your eardrums. Dani Filth? Nope, ’tis no CoF. But an alluring set of Black Metal rasps and Death Metal growls provided throughout Singularity. All of that accompanied by meaty riffs right down the track list and no discernible keyboard. Basic, bare bone metal.

Acosmic Ascendant just continues down this road, seemingly opened by one of these nightmare sculptures coughed up by H.R. Giger. The riffing on that one is just stellar. Now, let me point out Vertigo to you. An outstanding track. And it actually gets two solos out into the open in a record almost devoid of them. First you get more of an – what to call it – extended riffing. But a little down the road, a very mature solo follows the other one. All this embedded into a Black Metal tune that is just amazing.

Often you will find that bands try to beat you into the dust through extensive drum-work. Singularity shines positively in that respect. Not that they lack drums, far from it. The blast beats are pretty amazing. Brutal? Check. Ever present? Check. But never overly clicky, superfluous or overdone. This also speaks towards the mixing/mastering effort. Not once throughout the effort did I have the impression that stuff went missing. All there, always – when it needs to be present. Pretty good performance.

Towards the second half, Singularity goes Progressive!

Not quite in the proper sense of course, but from a Black Metal outfit, this is pretty stiff. And I do love this slightly Progressive flavor Stortregn injects – for example – on Aurora. They also get you variety, kind of switching from total metal to acoustic in a heartbeat. Sometimes even mixing these passages with rasps.

Now, there is this thin red line not to cross and this means to avoid over-doing it. Okay, I get it, they are good guitar players, but Elegy kind of destroys the menacing and metal laden atmosphere that reigned supreme before. And this in turn makes for a pretty disappointing ending shot.

Singularity is a rock solid Blackened Death Metal album. Speedy, aggressive and right down there in Hel’s kitchen, where this belongs. The meaty riffing and soloing at a very high technical level, together with the rasps and growls just provide this irresistible pull to continue to listen. Add drums and bass into the fray and you got the mix for a stellar record.

In addition, the way Stortregn manages to spice up down-in-the-pit Death and Black Metal sounds wins them the brownie points needed to rank decently. And they got potential to go farther, much farther. We will see more of them in future, I am sure.

Editor’s note: Don’t forget to check out their 2018 album Emptiness Fills The Void.