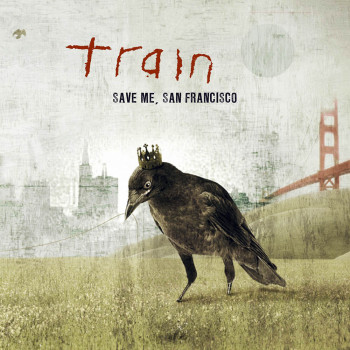 Well, busted: Here is one of my favorites – RockmusicRaider going mainstream billboard chasin’! What is the world coming to?

Train, faithfully headed by lead singer Pat Monahan and supported by long time members Jimmy Stafford and Scott Underwood (left the band in 2014, by the way), always get me up to a good mood again.

OK, I get it, folks: No metal there. So sorry. But you know what? If you ever lived in good, old California, which I did, this is THE style. If you talk simple rock and nothing sturdier, of course. Pop is an altogether other matter and filled with all of those pop queens that we won’t get into. Wouldn’t know what to say about them – apart from that they suck big time.

Train‘s way of making music is reminiscent of the way of living in CA. Which is – by the way – totally different from the rest of the good ol’ US. Save Me, San Francisco is a very good example of that. It is this kind of laid back, could-not-give-a-damn attitude that talks to me.

And it gives me somewhat of a counterweight of the sometimes a bit heavy true metal style of music. No offense to you metalheads out there, I am one of you as well – most of the time. So, call me full of shit if you want, but I do not give a damn neither.

The 2009 and 5th studio album Save me, San Francisco was a long time in the making from their last 2006 record For Me, It’s You, which only really got known in the US, but nowhere much else. This is why it felt like an eternity elsewhere in the world until the band came up with some new and internationally known material.

Train really became (kind of) famous with their 2001 album Drops of Jupiter, whose title song became a favorite among many radio stations. And you will find a live version of this song Save me, San Francisco. But as is often the case, the bands then fall into some sort of a depression hole. And some of them have real trouble getting out of this kind of abyss.

So, after some arguably not so stellar records and some over-valued hits like Calling All Angels from the album My Private Nation, they finally hit it big with Save me, San Francisco.

The enigma with this gig is that they somehow dwell in relative obscurity: Known well in the US with a large following, reaping prizes all over the place, but elsewhere – not quite where they could be. And this with a singer of Pat’s qualities! Perhaps a bit too laid back they are indeed.

They may have tried too hard to sound like a strange tincture mixed from 1/3 Alice Cooper and 2/3 Elton John with some bony, grinding rock blasts thrown in. This is like a badly mixed Martini and it just ain’t sitting well. Good that they corked that one real well in this album.

And many bands kind of give up after their initial high, and eek out a living at a relatively low level. Well, Train are not one of them. Of course, their hit single Hey, Soul Sister helped a lot. In truth this one really is the driver for this album. And a more refreshingly sung love ballad I have never heard before. Love it! No pun intended.

It appears that the band struggled a lot with this track. Twisting and turning it and finally goofing around with the ukulele, which – to their surprise – did the trick. And they landed a hit.

This song earned them a top ten citation on the Billboard Hot 100 – it came down to #3 actually, and deservedly so. And the track also got them some very acid remarks from some idiot haters. Not sure with what part of their mutual bodies these guys are thinking with.

Looking for more substance? The album got that too. For example Parachute that is more similar to their former provisions.

This Ain’t Goodbye – a rock ballad, Words and Brick by Brick are very thoughtful and good tracks. As usual full of private emotion, which is – by the way – one of the hallmarks of Train and one of their main strengths. Another very good example of the emotional angle is the overly sweet, cheese-dripping ballad Marry Me. It however found quite some acclaim with the audience.

Breakfast in Bed is the really only ugly spot on this album, lost them a point or so on the rating below, by the way. What a terrible track. But things cannot be all good. Would be too perfect and we cannot have that.

So, if you are on a long drive down the hot and sunny highways of California, this is your music. Clearly, Hey, Soul Sister drove this album out of the dust into the light. But the rest of Save Me, San Francisco is by no means bad. And Train managed to cut down on the cheese factor in this album, which I really appreciate. Real feel good music, no kidding folks. Enjoy!

And do not miss their follow-on record California 37 with a few more juicy tracks. This one will be worth your time, too.