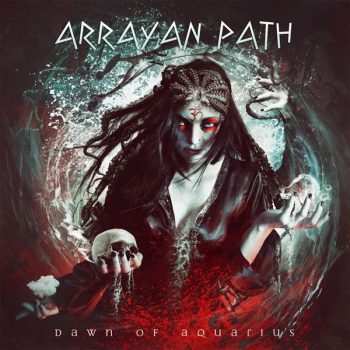 Many a metal wizard is already active in the Power Metal arena, with many more trying to get a foothold in a very crowded genre. And this breeds uniformity, which – by definition – shuns progression and evolution to anything new.

Methinks, that the ‘typical’ sound and style now ingrained themselves into the minds of fans and pros alike. So much so, that a certain expectancy arose with the fan community as to how Power Metal ought to sound.

Known values are good for the soul, are they not?

So, to avoid to swim up mainstream creek without a paddle, bands need to make an extra effort to be heard. To the point that some of them drive themselves to extremes to get there.

Gloryhammer in space, anyone?

Or they Unleash The Archers and play Mad Max in a desert. In other words, many bands resort to exuberance and flamboyance to stand out from the mean crowd. A drive that continues to almost religiously stir the stale brand of pottage Power Metal has often become.

Good that the genre produces counter-weights like Cyprus-based Arrayan Path that already unleashed critically acclaimed records like Chronicles of Light or IV: Stigmata. Led by the Leptos brothers and sporting a serious, somewhat orientally flavored approach to their trade. And by doing that, the band always manages to stand out from the crowd.

This is no different with their 2017 record Dawn of Aquarius.

Of course there are other outfits with an equally serious, yet inventive view on the genre, like the crusty Incursed of Northern Spain. Those are noteworthy for their scratchy, folksy approach to Power Metal. If only they would produce more original material, they would be so good.

But back to Arrayan Path.

Now if you search for comfort on well-traveled roads, then Arrayan Path is a good one to turn to. They provide these catchy tunes, delivered by the stellar vocal reach of Nicholas Leptos. And this known-value thing precisely risks to become their weak point.

For some reason, every track on Dawn of Aquarius kind of sounds like something we heard before. The melodies are pure Arrayan Path, make no mistake. Yet where Chronicles of Light managed to dazzle you with every new turn and new catchy refrains, this record goes where others were before. In other words, I am frantically searching for this visceral kick so important to a successful album.

And it is kind of there, but not quite.

On the upside, you’ll get a technically refined set of tracks all delivered in the band’s trademark style. Not too wild, and not too weak neither. And not an element out of place from a production standpoint.

Cool riffs abound and you’ll find some pretty stellar solos, too. As – for example – in The Flower Born on Itself or in Dawn of Aquarius, the title track. Then again, they aptly weave changes of tempi or oriental flavors into their sound, which does indeed raise the interest a trifle more. Mediterranean island metal beckons you, what can I say.

The album also features guest vocalists like Andreas Paraschos of Blynd, whose outfit already prominently featured on this blog. All of that adds to the allure of Dawn of Aquarius.

I also like the theme Arrayan Path chose. This time, the honor goes to the terrible goddess Kali and Hindu tradition in general. A dark and complicated theme indeed, yet exceedingly well built into the album. This, combined with good quality lyrics, definitely provides another high pillar for the record to shine on.

However, in the end you always have two choices. Either you build on what you know best, or you go for innovation and take the left path, the one unknown to you.

Dawn of Aquarius takes the former route. You will get an epic, solid package of Power Metal that sturdily stays on known shores. Never a metal hair out of place, stellar musical delivery and knowledgeable lyrics included.

Arrayan Path walk you down their 13-piece mantra theme without breaking step even once. This may be good in itself. Yet if – at the same time – the energetic drive loses itself in the mists of past glories, then – suddenly – you end up with an offering that is seriously lacking spice.

And this is what happened with this album.