Arrayan Path have this uncanny knack to connect to you immediately and get you to continue listening to their tune. I am not exactly sure what causes this, but Chronicles of Light is certainly pretty powerful stuff, sprinkled with a lot of passion and authenticity.

It is this extra kick that gets the reviewers attention for a record, even if the pipeline is desperately overflowing. Now, they just did exactly that to me with their 5th and newest album Chronicles of Light.

And it is this strange potion of Southern Mediterranean island-flavored metal that did the trick. And the fact that the heavy influence of the remarkable IV: Stigmata, their 2013 album, still persistently lingers at the back of my mind.

Of course, Arrayan Path join us from beautiful Cyprus and this saddles them with some brownie points already. Blynd be lauded for that with Liber Sum (totally different style, but same location and amazingly good). The island features a somewhat mysterious and pretty tight community, showing off different kinds of metal. This couples with a few jolly good studios that churn out good quality tunes.

Today’s 5-man band Arrayan Path rocked into existence back in 1997, but really only started to release music by Y2K or so (one demo each in ’99, then ’00). At that time they were actually called Arryan Path, but that did not sit too well with a great number of people. The band then decided to add an ‘a’ into their name, so that nobody would see them as being in cahoots with Nazism. After the demos were out however, not much was going on in terms of studio albums. The first one coming out in 2004. Only as of 2010 have we seen an acceleration of sorts, now culminating into this latest output.

But will Chronicles of Light be their best?

Because there is something that bothers me. The album is sometimes too smooth, too slick. Just not enough bad boy metal in there. No scratchy surfaces, no sharp and rusty edges to draw some blood from. The record abounds with Teflon tracks pieced together from well working parts of the metal universe.

And this when we should feel the sandy grit of the dusty dirt road in our teeth. All this comes spiced with lyrics that sometimes make me grind my teeth. But – then again – Arrayan Path have this somewhat mysterious ability to get glued to your frontal lobe and follow you around for a few hours.

But cheese apart, in the line of epic Power and Heavy Metal these islanders are 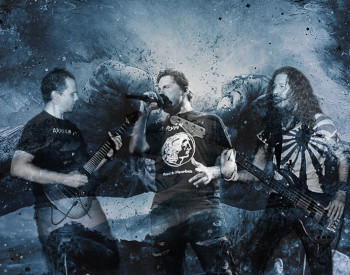 very good and up to par.

But still a much lighter look and feel, than the former more pronounced and much darker stance used in IV: Stigmata. And sometimes it is as if theirs is a tune straight out of Iron Maiden, galloping sound and all. Mixing and mastering is pretty well done by Vagelis Maranis, who was already active for Arrayan Path on their former albums. No complaints there.

Of course all balancing in the mastering act leads to nothing if the band is not up to speed. I really like the stellar performance of Nicholas Leptos on vocals. Further you will find Paris Lambrou on bass, keyboards and programming, Socrates Leptos on guitars and again keyboard programming (wow, too many cooks), Alexis Kleideras on guitars and Stefan Dittrich on drums. Chronicles of Light also features an insane number of guest musicians, and one is never sure which one gets on stage when.

The fuck is this with the first track?

Because Solomon Seed starts with this weird chant, seemingly from one of them nightmare YouTube videos . And I just wondered where this would all end up. But then – luckily – metal takes over quickly, and we are back on track. With a tacky chorus to boot – good grief. Interesting start for Gabriel is Rising thrashily making its entrance, but then falling back into a more mainstream song structure.

Speedy Power Metal greets you in Orientis with a pretty cool solo in the middle, albeit a bit short. Riff this, baby – I like it! And whoever thought these guys cannot do rock ballads – just check out Ignore The Pain.

You know, I usually hate rehashed songs from other people with a passion. But exceptions confirm the rule, don’t they? The Stefan Korkolis cover of Sign of the Scorpion back from the ’80s called Scorpio is really well done. In English this time, no kidding. Chronicles of Light (the title song) all of a sudden takes a sludgy, kind of doomish turn. Complete with some island cheese on this metal platter of theirs, but I like the downturned beauty of this track. The juicy solo just rounds it up well.

Then we move on to Iron Maiden again. Okay, sorry, no we don’t. But Lex Talionis all of a sudden moves from Doom to Heavy Metal. Galloping sound and all, albeit a weakened version of the mighty maiden.

The other rock ballad worthy of mentioning is the Guns’n’Roses-esque The Last Eulogy. Really powerful that one, yet definitely in fondue territory. This one beats the aforementioned Ignore the Pain. And I wonder, if three ballads out of a total of ten tracks is not a trifle too many.

Arrayan Path delivers a varied bag of island infused metal, seasoned with a still reasonable amount of cheese. Chronicles of Light is by and large a good one in the Power Metal line, but not one that would blow me out of the water at every turn of the road.

Sometimes I would have preferred a tad more grip to the tracks, a few more itches to scratch. Yet, the record is powerful enough to keep your attention and rock you around some. And it is generally a pleasure to listen to.

I will check them out live, for sure. If I am in Cyprus one day and was able to leave Blynd’s abode in one piece.