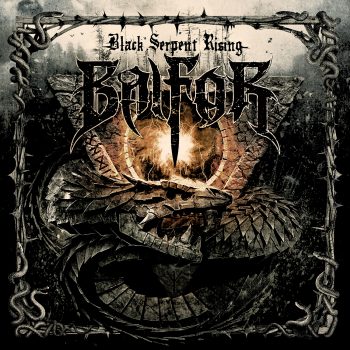 The RockmusicRaider offices were literally flooded with Black Metal offerings of all 50+ shades and beyond in 2016. A trend to move towards the dark waters of the river Styx that we saw emerging already in late 2015. And which continues to this day. Indeed anything blackened was pretty much game and lots of it in stellar format.

Now, 2017 already starts to shape up well. A first pitch black offering reaches us from the cold, cold steppes of the Ukraine. And it promises to be a juice dripping chunk of metal. Or does it?

But to get there, it is now time to descend into the fiery pit of desolation!

Follow me to the realm of the beast and meet Balfor. Just be careful that what you will find under yonder rock will not haunt you to the rest of your days. Or burn you to a crisp – or worse. ‘Cause the band created a piping hot and very unholy little item called Black Serpent Rising.

Balfor emerged from the shadows out of the empty shell Alter Ego had become in the late ’90s. The Ukrainian band only ever officially formed by 2001. They produced a score of releases since with three full length records, including this year’s concoction.

Now mind you, none of the previous records were bad, but this one I have real trouble putting down to write a few lines about it. Whoever said Black Metal cannot be captivating? This specific piece of molten, pitch black metal will teach you otherwise.

I particularly like the artwork drawn up by the Ukrainian artist Nugeslag aka Vyacheslav Smeshko. He is particularly well known for his work for Rotting Christ and also adorned the cover of NordWitch‘s latest, also present on this blog.

Black Serpent Rising takes off with a thunderclap!

And so they should. Skipping the dreaded intro, they barbarically step into their Black Metal universe. Serpents of the Black Sun is living proof of that. Starting off kind of atmospherically, wham it goes off like a bomb after some 15 seconds or so.

Compression runs high on Black Serpent Rising. But never fear. The decent mixing and mastering job saves the boat this time. But not only this. Using saxophones in a Black Metal production is already something, but then they surprise by clear voice elements in this very dark pea soup. Also, you’ll find that some of that is sailing very close to the wind blowing down from the Melodic Death Metal folks in Scandinavia.

Then they add to this unholy mix and throw in some Thrash Metal infusions, Black Metal style. It is indeed just barbaric and they live up to the tag Barbaric Black Metal. But in fact, the album is more a mix between Black and Death Metal with a score of well placed melodic elements.

What else in this new year’s offering?

You know, once they disperse with the stellar thrasher Dawn of Savage, you’ll suddenly catch this whiff of Fleshgod Apocalypse in Heralds of the Fall. Now, this navigates dangerously close to the latter. But the way they constructed the song, added clear vocals where there should be none is just irresistible.

The way Balfor vary their track list with a gazillion of undercurrents in Black Serpent Rising is one of the band’s strong suits. This is not some random song writing, but conscious crafting of structures and soundscapes.

Now, towards the end the corny fare of Wolfbreed is noteworthy. But the doomishly mid-tempo track Crimson Stronghold will take you on this ride to the bitter end. This one displays its Nordic influences quite strongly and I love it.

Alright, should you buy this record?

Balfor for sure take their landmarks from a number of influences in this blackened universe of theirs. Black Serpent Rising thus sometimes feels like a merry mix of unholy leftovers. Tossed into one pot, spiced up hot n’ hot and heated up to devilish temperatures. Then poured down the poor unsuspecting fans’ throats straight away.

The outcome is a stellar Black Metal mix, of a somewhat progressive kind. Dark, epic and dramatic, Black Serpent Rising and its Black Metal brand will suck you in until you have worn out your ears. Balfor have a point to call their style Barbaric Black Metal. Melting down undercurrents and elements and resurrect them in a very own brand of Black Metal sounding like Darkend on fucking steroids is one of their main strengths. And they have done it well.

So, should you indeed procure a copy?

Absolutely, this record will be worth your money and time. But make sure your metal heart is black enough to sustain this hearty fare. And play loud, or you will not be happy.

The record released by mid-January 2017.